A launch in Manchester 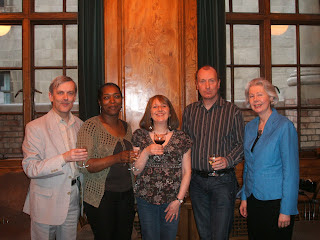 Yesterday evening proved enjoyable, with the launch of M.O.: crimes of method in the august, wood-panelled surroundings of the Committee Room up on the second floor of that splendid building, Manchester Central Library.

The launch was attended by a number of contributors – in the photo, they are: myself, Karline Smith, Kate Ellis, Martyn Bedford and Bernie Crosthwaite. Karline, Martyn and I gave readings of our contributions to the book. The readings were recorded and, all being well, one or more of them may soon be available on the website of the publishers, Comma Press.

An added bonus of the event was the chance to meet Karline and Martyn, neither of whom I knew before their involvement with the anthology. It was especially interesting to talk to Martyn, as I thoroughly enjoyed The Houdini Girl, which is possibly his best known novel, when it was first published in paperback some years ago. It’s a first class book that I strongly recommend.

Martyn isn’t a particularly prolific novelist, and is thought of, I think, essentially as a mainstream literary writer rather than specifically as a crime novelist. But some, at least, of his work explores the territory of crime fiction and certainly his story ‘A Missing Person’s Inquiry’ is rather wonderful. I was delighted to have the chance to include it in the anthology.

I wasn't there, but I'm so proud to be in the book.

André Marois - Just coming, after I kill myself

Hi Andre, good to hear from you!