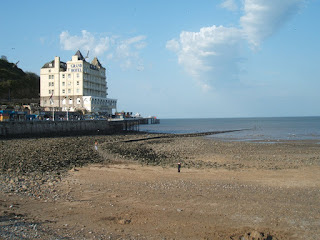 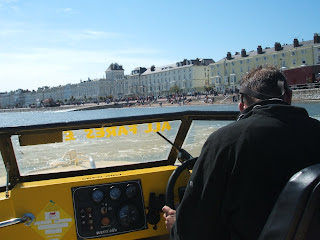 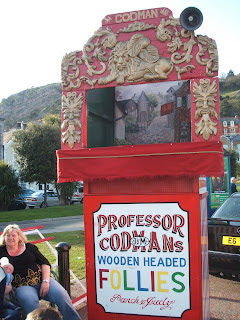 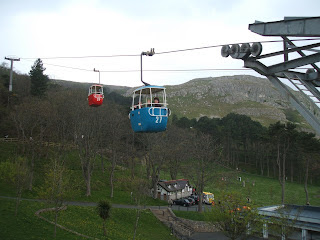 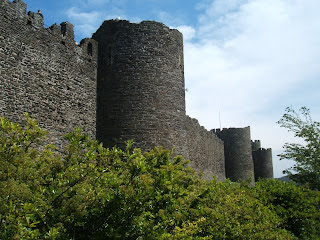 Just back from a bank holiday week-end in Wales, to find that my first attempt to use Blogger’s new method of scheduling a blog post in advance (for yesterday morning) seems to have worked out; something I didn’t take for granted, since my command even of simple technology is rather hit-and-miss. And it was great, on returning, to come across two very generous reviews of Waterloo Sunset, on Juliet Doyle's 'Musings from a Muddy Island', and Roberta Rood's 'Books to the Ceiling'.

North Wales is one of my favourite places in the world; a beautiful area that I’ve known since childhood. This week-end we had pretty much the best weather of the year so far (not saying much, to be honest) and there was the chance to enjoy trips by funicular tram, cable car (the trip up the Great Orme is apparently the longest cable car ride in Britain) and speedboat. Castles, traction engines, Punch and Judy shows – all the elements of a traditional British setting were in evidence. All very enjoyable, and I had the chance to think about some aspects of the current work-in-progress, as well as making a start, at long last, on Ann Cleeves’ latest book White Nights.

Oddly enough, Wales has not featured extensively in crime fiction, although I’ve set one or two short stories there. Lindsay Ashford, who lives in Borth, writes a series set in mid-Wales, and there have been a few notable novels with a Welsh background – an example that springs to mind is Christianna Brand’s Cat and Mouse, while I’m sure there must be quite a few that I’ve forgotten. However, I’m not convinced that the full potential of this marvellous country as a background for detective fiction has yet been adequately explored. One day, I might have a go at a Welsh-based crime novel myself.

Hi Martin, I've got a list of Welsh authors, though they don't all set their books in Wales: http://www.eurocrime.co.uk/books/books_Wales.html.

I LOVE North Wales! Spent all my holidays there as a child (both my grandmothers lived in Old Colwyn) and regularly return with my daughter to haunts like Conway, Gwdyr and Rhos-on-Sea. Have you ever been to the Harlequin Puppet Theatre? I was once permitted back-stage and can still see that room hung with what looked like hundreds of huge marionnettes. Great setting for a crime novel scene!

Thanks, Karen. Several names in your list I shouldn't have forgotten, even for a moment!

Sarah, though I spent numerous childhood holidays in Colwyn Bay (at a hotel now demolished, sad to say) I have never been to the Harlequin, which is not easy with hindsight to understand! I still love the area. As a boy, I didn't rate Llandudno, but a lot of money has been spent on it, and it is now marvellous.