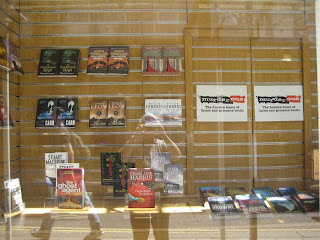 This is one of a couple of photos of Waterloo Sunset featuring in the window of the Murder One bookstore in London’s Charing Cross Road that were, happily, waiting for me when I returned home after a couple of days working away (the last couple of blog posts were scheduled in advance.) The photos were kindly sent to me by Maxim Jakubowski, who owns the shop and has played an influential role in the crime fiction world for more than twenty years.

I first came across his name in the 1980s, when he edited the Zomba omnibuses which introduced such names as Cornell Woolrich, Fredric Brown, David Goodis and Jim Thompson to a new generation of readers, including me. Each volume contained four novels and a pithy introduction; each was a real find.

Maxim and I met at the 1990 Bouchercon in London. At that time, I hadn’t published a novel, but I entered a competition based on the TV show Mastermind, but focusing on crime fiction, and to my genuine surprise, I won it. Maxim was the quizmaster and Geoff Bradley, editor of CADS and someone else I’d never met before, kept the score.

We continued to bump into each other at crime conventions, notably the late lamented Shots on the Page (at Nottingham) and Crime Scene (at the National Film Theatre in London.) Over the years, Maxim has included stories I’d written in several anthologies that he’d edited, something for which I’m very grateful. He’s someone who seems to know everyone – not surprising, since a great many people who love crime fiction visit his shop every year. If you don’t know it, do have a look in next time you’re in London. Not only does it contain a vast range of contemporary books and other crime fiction items; there is also a very good section hand section downstairs.