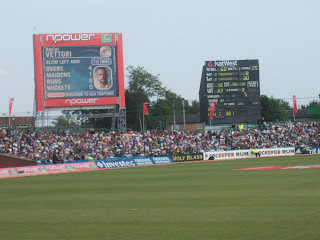 I’ve spent the last two days at Old Trafford, watching the Test Match between England and New Zealand. I’m a cricket fan, so this was no hardship, and in fact my parents first got together at a cricket match, so perhaps I have cricket to thank for my very existence. Mind you, I have a good many friends whose judgment is otherwise impeccable who really hate the game with a passion. But, once you develop an interest in its complexities, it does tend to become addictive. Though I can see why a day spent watching a match ended hours early because of bad light (as happened on Friday) can seem very frustrating.

Friday was spent in the company of colleagues and clients, while yesterday I went as guest of Michael Malone, a former partner of mine, with whom I wrote three editions of a book about equal opportunities law. When he left to become a judge, I found writing the fourth edition on my own a rather testing experience in itself. It was good to catch up with him. Michael, incidentally, had a short career as a crime publisher – he was the brains behind Ross Anderson books, which published Bertie Denham, Glyn Hardwicke and others in the 1980s..

Cricket is a game with an impressive literature, and it has also featured in a good deal of crime fiction. Conan Doyle was a keen cricketer and Sherlock’s brother Mycroft was named after the great Derbyshire bowler William Mycroft. Perhaps the most famous cricketing crime scene appears in Dorothy L. Sayers’ Murder Must Advertise – Lord Peter Wimsey was, needless to say, a splendid cricketer. Julian Symons and Henry Wade (in the excellent Lonely Magdalen) are among the many other classic writers who have included cricketing scenes in their novels. I suspect that none of them dreamed the day would ever come when you could watch action replays of key moments on huge television screens erected behind the boundary line.

It’s more difficult to build an entire crime story successfully around cricket. There is an old green Penguin called Alibi Innings by Barbara Worsley-Gough, although when I read it a long time ago, I wasn’t too impressed. Testkill, a joint effort by former England cricket captain Ted Dexter and journalist Clifford Makins was another Penguin book; I enjoyed it much more, although it hardly qualifies as high quality literature. Perhaps the most daring use of cricket was in Playing for the Ashes, by Elizabeth George. For a female American writer to build a very substantial book around a game that isn’t exactly big news in the States seems counter-intuitive, to say the least. But I would guess that, with the exception of Murder Must Advertise, Playing for the Ashes has sold more copies than any other crime novel with a cricketing element.