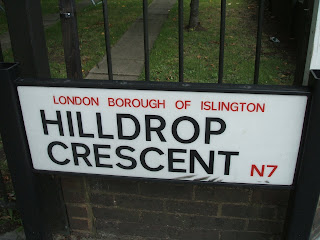 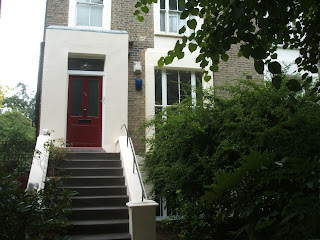 It may seem belated, now that Dancing for the Hangman, my novel about Dr Crippen, is only a few weeks away from publication, but I have at last made a pilgrimage to Hilldrop Crescent in Camden, where the little doctor is said to have murdered his wife Cora, aka ‘Belle Elmore’.

Number 39, the former Crippen house, no longer exists. Apparently, it was hit by a German bomb during the Blitz. Now the site is occupied by a rather austere and functional block which rejoices in the name of Margaret Bondfield House. There is no sign, or at least none that I could see, mentioning the association between Hilldrop Crescent and one of our most famous murderers.

Some of the neighbouring houses do, however, seem to be built to the same design as Number 39. It’s fascinating to stand in this famous side street and imagine what it must have been like when Dr Crippen and Ethel Le Neve lived as man and wife after Belle’s mysterious disappearance, for a few happy months until Belle’s friends persuaded Scotland Yard to investigate. After that, the couple fled abroad, Inspector Dew found human remains under the cellar, and the train of events was set in motion that would take Crippen to the gallows.

Does that mean you've published 3 novels this year Martin?

Two brand new ones,yes, and the paperback edition of The Arsenic Labyrinth, along with M.O., the CWA anthology.
It was always going to be a hectic year, 2008. I shall catch my breath in 2009!

Good luck with the publication, Martin! I'm looking forward to seeing the Crippen story on the shelves.