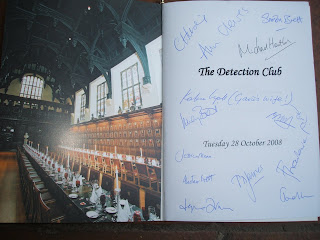 My thanks again to those who have commented on my Detection Club post, or sent emails. To the world at large, the Club is best known for the production of a number of well-known books, both anthologies and 'round-robin' novels by various hands, and I will post about some of them at a future date. In the meantime, I thought I might answer a few of the questions I've been asked.

Is there a fixed number of members of the Detection Club? I'm not sure of the answer, but in his brief history of the Club, contained as a finale to the excellent 2005 anthology The Detection Collection, Simon Brett says the number 'has always ended up round the fifty mark.' He explains that election is by secret ballot, and that no-one knows their names have been put forward unless and until they get a letter informing them of their election' (and I can confirm this is absolutely true.) He adds: 'I have never been aware of anyone lobbying to get themselves elected. Which I think is just as well, because lobbying is not behaviour that would endear anyone to the membership'.

Simon's account also contains selective information about the Initiation Ceremony, the form and content of which has changed over the years (Ngaio Marsh recalled that Dorothy L. Sayers fired a pistol on one occasion, but who knows whether there was a touch of fiction in her reminiscence?) There's no secret handshake, but one element of 'apparent continuity' over the years has been that the President wears what Simon describes as 'a rather splendid quasi-academic gown'.

He concludes: 'Like everything else about the Detection Club, the mythology is...blurred and unreliable...which I must say I find one of the most enduring - and endearing - qualities of the organisation.'

And long may it continue!