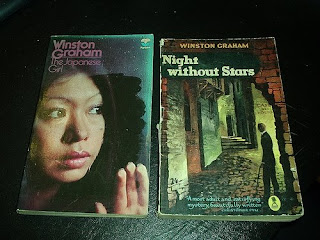 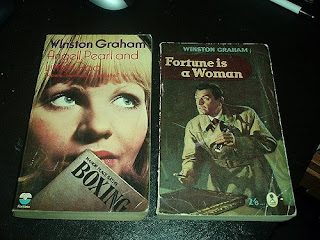 In the 1970s, the hugely popular television series ‘Poldark’ made Winston Graham’s name very well known. I never got into ‘Poldark’, a historical saga set in Cornwall (even though I thought Angharad Rees, one of the stars, was truly lovely) and I was never tempted to read the books. Not until some years later did I discover that, before he turned to swashbucklers, Graham was a highly accomplished writer of crime fiction.

Successful, too. He wrote the book on which Hitchcock based that interesting movie ‘Marnie’, starring Sean Connery, and also the story that sourced ‘The Walking Stick’, a quirky thriller boasting another starry cast that included the late David Hemmings, Samantha Eggar and Francesca Annis. I rather like both films.

And there is more. Winston Graham was the very first winner of the CWA Gold Dagger Award in 1955, for The Little Walls. (In fact, in those days, the award rejoiced in the name of the Crossed Red Herrings Award. It changes name from time to time, having recently been the Duncan Lawrie Dagger an expediency to reflect the short-lived sponsorship of a bank, but the Dagger name changes are irritating; to my mind the Gold Dagger is the right title for the award for best crime novel of the year.)

So I decided it was high time to read a bit of Winston Graham. And thanks to eBay, I now have a decent and modestly priced haul of his paperbacks.

I loved Winston Graham's crime/mystery fiction - including Marnie and The Walking Stick (enjoyed both movies years ago, too). I also liked the Poldark series, though the first four are much better. He continued them after the TV series began, and these were not as good. Last I heard of him a few years ago, he was still writing, which is pretty good going as he's a fair age now.

Not having read any of Graham's crime fiction, I'll have to remedy that. I don't know which entices me more, your write-up, Martin, or those covers!