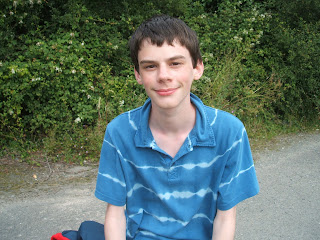 This is a blog about crime writing, and I don’t usually feature my family in it – they have more than enough to put up without my intruding on their privacy. But today I’m making a bit of an exception, because it’s been a special twenty four hours in the life of my webmaster and the designer of this blog, Jonathan. He’s done very well in his A Levels, so he can now accept the offer of a place at Oxford – he’ll be reading Law at my old college, Balliol, as from October. I'm truly delighted for him.

Jonathan is, like me, a big fan of the writing of L.C.Tyler, one of my favourite discoveries of the past few years. Len’s latest, Ten Little Herrings, follows up The Herring-Seller’s Apprentice. The only snag is that due to a variety of commitments, I haven’t got round to reading it yet - but Jonathan has, and therefore he has contributed this guest review, his first:

‘We rejoin the enigmatic Ethelred and his irrepressible agent Elsie Thirkettle in a faded hotel in a French backwater some months after the events of The Herring Seller’s Apprentice. With his credit cards cancelled and worrying about his Sussex boiler, it seems Ethelred has no alternative to return with Elsie to England. That is, until murder intervenes.

The hotel becomes the backdrop for a traditional detective setup as the guests all fall under suspicion. Elsie begins her own amateur investigation and soon discovers that few of the guests are the simple philatelists they claim. Her zeal and fondness of chocolate cause her to clash with the police, while Ethelred is resolutely unhelpful. Meanwhile, the proceedings are clouded by the recent emergence of two rare stamps, rumours of a notorious necklace, and an intrigue of Ethelred’s own.

Events are concluded with a stereotypical gathering in the dining room, where Elsie produces her controversial discoveries. As with the entire story, this scene combines traditional detective fiction with memorable wit and a modern twist. Ten Little Herrings is a light-hearted and thoroughly entertaining sequel.’

Well done Jonathan and a good review as well.

Thanks< Jilly and Uriah, from both of us!
And now I'm setting off for Oxford myself, for the St Hilda's weekend, which promises to be very enjoyable.

I am deeply honoured to be the subject of Jonathan's impressive first guest review. Many thanks for the kind (and, if I may say so, perceptive) comments. Above all though, congratulations on the A Level results and the place at Balliol. You'll love Oxford and, like a lot of us, won't be able to resist going back from time to time after the three years are up. I too am about to pack my bags and head for St Hilda's, where I look forward to listening to Martin tomorrow on the subject of Original Sin.

Congratulations to both of you!

A very fine first review. I have not got around to Tyler yet, but there is a chance as I have the first on my shelf at home as well as in our cottage :D

I enjoy it very much whenever I succeed in persuading my children to read some of the same crime novels as me, and it has become somewhat easier now they have all come of age :)

Many congratulations to Jonathan! He also great taste in books...

I think the test of a good, favourable review is whether it propels you to read the book. I certainly now feel propelled to seek out L. C. Tyler. An assured, authoritative performance, Jonathan.

Great website and blog too – my favourite cyber watering hole. Didn’t realise you were behind it!

Congrats on the A Levels – enjoy Balliol.

Martin, you must be very proud.

Len, Maxine, Dorte, Rhian and Paul, thank you all for those kind words. Just back from my Oxford visit, and it's reminded me how lucky I am to have such a nice excuse to return to that marvellous city a bit more regularly in future.