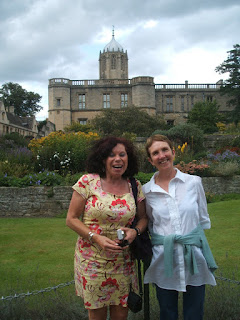 Now, at last, the story can be told. I am delighted to share the news that the Vera Stanhope novels written by my good friend Ann Cleeves are to hit the television screens. Last weekend, I took Ann and Cilla Masters (also pictured, outside Christ Church College) on a walking tour around Oxford and Ann mentioned that the news was about to break, while swearing us to secrecy. But now the embargo has been lifted, and it’s really very exciting.

The equally good news is that Vera will be played by that splendid actor, the Oscar-nominated Brenda Blethyn.OBE, whose glittering CV includes films such as Pride and Prejudice. I first came across her in a very enjoyable comedy series called ‘Outside Edge’, which featured my favourite sport of cricket, and drew her to my attention as a performer of real talent. It’s no surprise to me that she’s gone on to enjoy such success, and I’m sure she’ll be good as Vera.

Vera first appeared in The Crow Trap, which was Ann’s first stand-alone and quite a departure from her previous work. Ann acknowledges today that the book was perhaps over-long, but when I read it, I was immediately impressed with the character of Vera, who is that rarest of creatures, a genuinely distinctive detective.

The first ‘Vera’ will be based on Ann’s novel Hidden Depths. Filming begins in October and I can’t wait to see the finished version. Ann is a fine writer who wrote splendid novels for many years before receiving the scale of acclaim that she deserves, and it’s great to see her achievements in the genre rewarded.

Congratulations to Ann! Not only are her novels hitting the small screen, but it sounds like they're going to be well-produced and cast.

Whether or not, the death penalty remains in other countries and the fact that it no longer exists here, the fact is that although we read crime, the gruesome factor is more popular as the old fashioned variety is no longer of interest to the editor. Readers and editors prefer to have a true sense of realism and if it is gruesome then that is the reason.

This is good news indeed! The Crow Trap too long? - not a single page!

I have just googled Brenda Blethyn, and it seems like a good choice - though she looks much better than my image of Vera.

Greetings, Fiona. Dorte, you should know that Ann is a modest person and self-critical about her work - for example, about her early books about George and Molly Palmer-Jones, which I enjoyed even before I got to meet the author.

Yes, Ann seems to be very modest - like most other crime writers I have come across while blogging.

I am so pleased to hear that news. I really like Vera. But I'm inclined agree with Dorte. Brenda looks a bit too luscious. I envisaged a sort of feamale version of Warren Clarke. Maybe a younger version of Patricia Routledge with less couthness.

Wow, that's exciting. I love Brenda Blethyn. The news of the show is exciting enough, but that's a real coup. I hope the shows make it out our way.

I read The Crow Trap on my recent holiday and though I was somewhat daunted by its length (not because I don't like long books - but because in my experience most crime fiction that is more than about 300 pages is too long for its content) - but I needn't have worried. It is a great read, and the book's structure very well suited to the length, as each chunk is told from a different POV/perspective. This is excellent news (though for some reason I think I already knew it!) and I'm looking forward to seeing the programme. I have only read The Crow Trap so far in the Vera series, but have loved the 3 (so far) books of the Shetland quartet.

Thanks for these comments. The idea of a female Warren Clarke is an interesting one! He did a great job with Dalziel.
Maxine, one of the troubling aspects of these tv deals is that they are 'in the ether' for a long time before everything is in place. I think I'm right in saying that it's only in the last couple of days that the last contractual documents have been sorted out for the show to go ahead. Which is a big relief not only to Ann, I'm sure, but also to us fans of Vera. The diappointments associated with tv are legion (believe me!) and I'm really glad that filming of this series is actually going ahead.

Discovered Ann's work while holed up in a, well hellhole! Her storytelling talent made things a bit easier to bear, so very pleased to hear the novels will be adapted for telly series. I hope all involved do her proud.

Greetings, Minnie. Thanks for dropping in.

I'll look into the author, but I'm sure if Brenda B. is in it, the program will be excellent. There's nobody like her. She brightens up the screen no matter what role she is playing.

Nan, I agree she is very good.