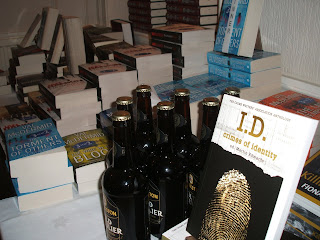 Today I set off for the Theakston's Old Peculier Crime Writing Festival at Harrogate. For the first time I've been invited to be on a panel, 'Legal Eagles', on Saturday. My fellow panellists include the marvellous Frances Fyfield.

I've been involved with Harrogate in various ways over the years. Hosting a table at a murder mystery dinner, for instance, and giving a talk at the Creative Thursday workshop to would-be writers. It's always a very well organised weekend and for that Sharon Canavar, Erica James and their team take great credit.

One highlight was when The Coffin Trail was shortlisted for the best crime novel award, and I was up against Ian Rankin, Val McDermid (who won), Stephen Booth, and Susan Hill. It was certainly one of the highlights of my career, even though I do think I've written quite a few better books both before and since The Coffin Trail!

And another good occasion was the launch four years ago of the CWA anthology I.D. at an event at the Pump Rooms. Note the pints of Theakstons strategically displayed on the book table!

I loved The Coffin Trail even if you do make the secondhand book seller a bit iffy! I've just been writing on my blog about how writers are often best know for a book that is not their best. I suppose the dame is true of prizes: that authors might get nominated for a prize with a book that even the author doesn't think is their best. Out of interest - which of your books would you award "The Best Novel by Martin Edwards" to?

Enjoyed the 'Legal Eagles' panel today, Martin. I liked your point about moving a character forward in a way that won't mystify a reader coming in at the middle of the series. As I'm writing the fourth book in my Kate Shackleton series, this is something that's in my thoughts.

Hi Juxtabook - I'm very fond of second hand booksellers, in real life!
Interesting question. I find it hard to choose between Dancing for the Hangman, The Serpent Pool and Yesterday's Papers. The Hanging Wood is also in the mix but I'm still too close to it at present!

Hi Frances, I'm glad you liked the panel. Lovely to see you and sorry we didn't have time for a longer chat. Are you at St Hilda's?