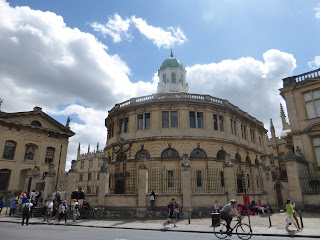 On Sunday night, immediately after departing from the Harrogate Festival (of which, more soon) I got in the mood for an unforgettable return to Oxford by watching, in a hotel on the outskirts of the city, "The Secret of Bay 5B." This was an episode of Inspector Morse dating back to 1989  This was an episode written by Alma Cullen, whom I had the pleasure of meeting many years ago, when my Harry Devlin books were first optioned for television, with Alma lined up to write the scripts. It never happened, which was not only the story of my life as regards TV,but also a shame, because she's written many excellent screenplays and proved to be excellent company.

Inspector Morse owed its success, as do its entertaining follow-ups Lewis and Endeavour, to a combination of well-plotted stories, quality acting, and perhaps above all, the wonderful background of Oxford. It was fascinating to see how little the city has changed, in all its real essentials, in more than a quarter of a century, and indeed in the many years since I spent a very happy time there. What changes are the "modern" bits. The richness of its history is an absolutely integral part of the city's appeal. Even if you don't love history as much as I do, being somewhere that has such an extraordinary past is quite a special feeling.

Alma's plot revolved around a corpse discovered in the Westgate multi-storey car park. Yet this is now being demolished - and a good thing too, I have to say; it was a very ugly place. Alma came up with a clever plot twist involving a car parking ticket and an alibi, and one other car-related change is the ease with which, in the 1980s, you could drive down High Street. Not so today. Oxford is now designed to be very unfriendly to motorists, which is fine as long as you don't have to collect loads of luggage from your offspring's college right in the centre of the city...

The occasion of my trip was again offspring-related, as my publicity adviser and ace multi-lingual writer and journalist Catherine Edwards was awarded her degree after four years spent studying German and Italian, not only in Oxford but also such wonderful cities as Berlin and Bologna. It was lovely to see her celebrate her great success in the stunning surroundings of Christopher Wren's Sheldonian Theatre, and to listen to an excellent speech by the Vice-Chancellor reminding us all of the remarkable 800 year history of the university before heading back to Lincoln College for further celebrations. Oxford is a unique place, and my visit on Monday will live in my memory for as long as I'm able to remember. 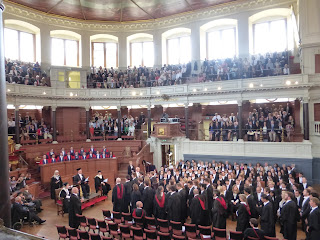 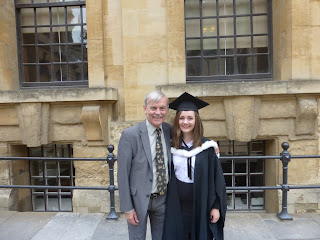 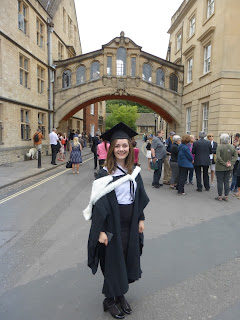 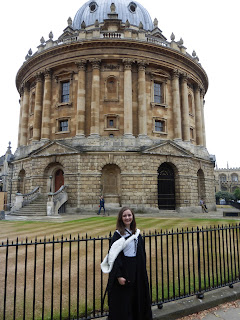 Many congratulations to the Edwards family!

Congratulations to Catherine and all good wishes for her future!

Congratulations to all - what a lovely event!

Fiona and Moira, thank you. Of course I am a biased father, but I admire her skill, dedication and hard work enormously and I have no doubt she will achieve success as a writer, as well as in other fields.