Reprinting The Golden Age of Murder 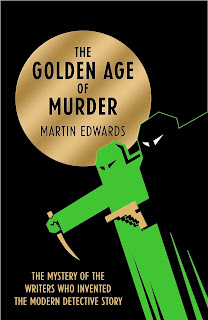 I'm delighted to say that the hardback edition of The Golden Age of Murder has been reprinted. A few times in the past I've had a hardback novel reprinted after the original print run sold out, but in those cases the print run was considerably smaller. What accounts for this happy development? The quality and quantity of reviews are a big factor, I guess. And I'm also extremely grateful for the word-of-mouth recommendations that have helped the book to do so well.

These things do make a huge difference. Over the years I've written some books of which I was really proud which made only a limited impact in sales terms- Dancing for the Hangman in particular springs to mind, despite the great reviews it received. This time, I've received many more emails and even traditional letters from readers than for any other book. Even though The Golden Age of Murder isn't a novel, it's still a real thrill to find a large number of people responding to it so positively.

When the book was being prepared for publication, I must have driven the publishers crazy by making continual changes. I kept finding out new information, and dreaming up fresh things to say. You have to draw a line somewhere, but happily, my editor was very tolerant, and I like to think that the reaction to the book has justified my belief that it was worth doing everything I could do keep improving it.

But that process is potentially endless. The reprint has enabled me to include some additional items (three extra author photos, and also some new trivia for the end notes) and also to correct some printing and other errors that crept in - no doubt in part due to my constant tinkering. I don't think it's practicable with a book of such scale to eliminate every conceivable error, but I do feel very happy about the latest set of changes.

Will there be any more changes for the paperback edition, due out next May? Well, I continue to be enormously grateful to people who contact me with fresh snippets of info (and occasionally to point out typos) and please do keep them coming. The quest for perfection may be doomed to failure, but the true writer, I think, always wants to keep improving.

P.S. Since I posted this a few hours ago, I've been contacted by an expert on GA fiction from the US telling me about a fascinating snippet of Detection Club history from the 30s. Such is the power of cyberspace, and the generosity of fellow crime fans.
Posted by Martin Edwards

Labels: Dancing for the Hangman, The Golden Age of Murder

To use the most overused exclamation of delight: "Awesome!" In this case I think it truly is. :^D

Excellent news, Martin! I can't think of a more deserving book to be reprinted. (And a bonus for you to be able to incorporate some revisions into the reprint.) Congratulations!

While I enjoyed it immensely and it's great that it's doing well and needs to be reprinted, it does rather remind me of artists who put out enhanced editions of their albums: those who actually went out and bought it straight away end up with rather less content than those who waited for the enhanced edition. Maybe the additions/corrections could be listed on a website for those in that position? That wouldn't affect sales of the reprint but it would allow the buyers of the first edition to end up with the complete version.

Thanks, everyone. Much appreciate your support.

Anon, the crucial difference is that the first edition of a hardback will always be the most valuable. But you can have the updates with pleasure. Contact me, privately if you wish, and I will let you have my notes with all the changes, with great pleasure. You will see that they are in fact not too numerous, but I wanted to make them, because little things can make a difference.

Have you ever seen Jasper Fforde's website, where he offers files of all the "corrections" to the Thursday Next novels?

It's striking how publishing attitudes toward classic crime fiction have changed in the last few years.

It's also true that new material is prone to appear after a book comes out and it's nice for an author to have an opportunity to make emendations.