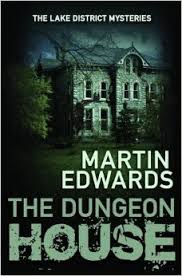 The Dungeon House is the seventh Lake District Mystery, and it has just been published in the UK, by Allison & Busby, and in the US, by Poisoned Pen. As usual with my series novels, I've tried to do something fresh while striving to retain the elements that have appealed to readers of the earlier books. And whilst it's tricky for an author to judge their own work, my feeling is that this is my favouiite in the series to date. This is the first novel I've written since ceasing to be a full-time lawyer, and I think the extra time spent crafting the story was beneficial. 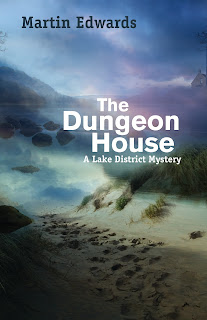 Another key factor, perhaps even more crucial, is that I found the location of the story absolutely inspiring. I've mentioned previously the research that I've undertaken in Ravenglass, and other parts of the west coast of Cumbria. By comparison with other parts of the Lake District, this is a relatively unfrequented area, yet it's rich in history and dramatic landscapes abound. 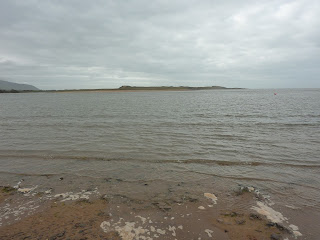 The first four chapters are set twenty years in the past. A man called Malcolm Whiteley (yet another character who owes his surname to a Derbyshire cricketer!) has made a fortune out of selling his business, and lives in the elegant Dungeon House, just above Ravenglass. But he suspects his wife Lysette (I created her after watching a stage play featuring Lysette Anthony, whose physical appearance helped me to get an image of the character clear in my mind) of having an affair. But is there really a mystery lover, or is it all in Malcolm's troubled mind?

A shocking crime is committed, and immediately the action switches to the present day. Hannah Scarlett and her team are investigating the disappearance, three years earlier, of a teenage girl. Then another girl goes missing, and it emerges that both cases have a curious link to events at the Dungeon House all those years ago. Meanwhile, a woman who was friendly with Malcolm Whiteley's daughter decides to return to Ravenglass, setting in motion a sequence of mysterious incidents. What on earth is going on? To find out, of course, you'll have to read the book! 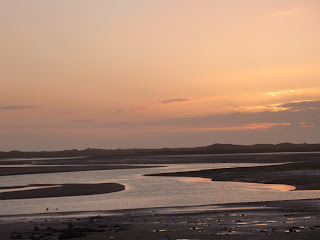 I ordered mine from AmazonUK in July and was surprised to receive a copy of the Poisoned Pen edition a couple of weeks ago - a very pleasant surprise, because I didn't expect it so soon! I read it in a couple of sittings and found it very hard to put down. It's certainly different from the previous Lakeland books and the greater emphasis on Hannah and her colleagues appears to open up new possibilities for future characters and twists. The extra plot strands took a lot of concentration but come together so well at the end, and I really appreciated the way you dealt with the 'after' scenes following the shocking climax.....there was just sufficient description to enable me to empathise fully with those who witnessed it without having horrors of my own! Congratulations on another brilliant book, Martin. I shall now go and re-read it with great pleasure, enjoying what is familiar and finding all sorts of things that I missed the first time around. Ah, that's the great joy of being a quick reader!

We were talking about the Campion TV series a while back - Lysette Anthony has a very major role in an episode. One of the best episodes, in fact.

Thanks, Margot hope you enjoy it!

Fiona, I'm delighted that you liked it. I felt that The Frozen Shroud was, intentionally, more descriptive and character based than plot driven, so I wanted the next Lakes book to have a more elaborate plot, and a plot structured in a different way. I'm conscious that it is quite a demanding read, although of course it's hard for an author to judge quite how demanding the puzzle is, when they already know the solution! I also very much enjoyed writing the scenes from the perspective of Joanna, and working out ways of 'playing fair' whilst preserving some secrets until the end....

Thanks, Roy. I've been weighing up fresh bits of Cumbria for the next book!

I'd forgotten that, Graham. I do have the Campion DVDs, so I must check that episode out...

I'd forgotten that, Graham. I do have the Campion DVDs, so I must check that episode out...

Sounds brilliant. My copy is on the way (I hope) and I'm really looking forward to it.

I loved the Dungeon House. (Amazon sent me the US edition early). This is the best cold crime since the Arsenic Labyrinth. Easy to see why they take a long time to write because the detail is good and they need to be tied up tightly.

There is, though, one word missing ...... "Louise" !! I love the humour she brings. We don't get told about H+D until p73 but no-one says what has happened to Louise. There are about 5 months beween Shroud and DH and in that time Hannah sells up and Daniel gets published (in record time). We don't hear about what happened in Wales.

I hope ME is still keen on these books because I really enjoy them and love the 2 main characters. As I live in the Lakes, I can tell you that the new swimming baths in Grange you tell us about havve now been knocked down. Also recently Cartmel Priory had a chruch service for the Magna Carta and the Chief Constable sent his rep, who was a DCI. Now there's a job for Hannah !
Daniel wants to write more about murder. Maybe he could write about how well Hannah has solved cold crime in Cumbria.

Thanks, Harriet, and fingers crossed that you enjoy it.

Alastair, great comment, thanks very much. You are absolutely right in spotting that I've left certain things out. And trust me, there is a thought process behind it! Without going into great detail here and now, the thinking is that the gaps will be filled, bit by bit, in the future. It's a way of keeping the series fresh, something I've experimented with increasingly - as with, for instance, the decision to withhold the secret of the cipher garden until the second book.