The Whodunit Dinner and The Sinking Admiral 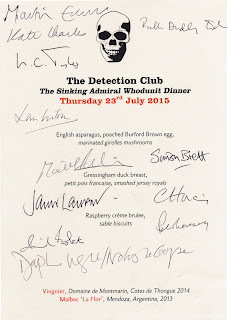 This project has been masterminded by Simon Brett as President, and participating in it has been hugely enjoyable. I'm glad to say that the book has now been completed, and that it will be published next year by Harper Collins, who have already enjoyed great success in recent years with reissues of earlier Detection Club books, including Ask a Policeman and The Anatomy of Murder.

When Simon first mooted the project, a group of members volunteered to take part, and although one had to drop out for health reasons, unfortunately, someone else stepped in to take her place.The early stages of planning took a considerable time, but once we had the publishing contract signed, the deadline concentrated our minds, as it usually does with writers. We've had a number of meetings to discuss the project as it proceeded, and when the summer arrived, the book was in a pretty decent state.

We did not, however, know whodunit! So Simon, who has put a great deal of energy and skill into the whole exercise, organised a wonderfully enjoyable Whodunit Dinner at the Groucho Club - not far away from the site of the Detection Club's original premises in Gerrard Street - and as well as having a highly convivial time, we worked out a solution, and who would write it. (The menu above is signed by the contributors who were present, although a few could not make it.) It must rank as one of the most memorable occasions of my writing career. Wild horses would not, of course, drag any more information out of me about the story at this stage, but it's fair to say that we are both relieved and happy about the way the project has turned out. It's been tremendous fun, and we are very much hoping that readers will find the book is a lot of fun, too. 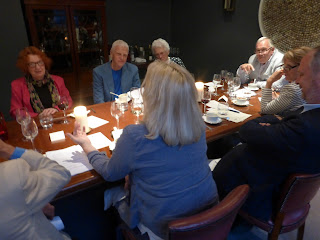 Sounds wonderful. How exciting. I cannot wait. I know the Groucho well, many an album launched there back in the day. Keep me informed. :)

I've just finished reading The Golden Age of Murder and I thought it was excellent - most interesting book I've read this year and it kept me so riveted I got through it in three days. Particularly fascinating were the sections about Anthony Berkeley as he's been one of my favourite authors ever since I read most of his books as green Penguins 30 years ago. It's also given me some more obscure titles to look out for. I'd score it as 99 out of 100 with one off for the typos (H.R.F. Keating did not publish a book in 1875!).

To have the final product signed by all the contributors--that would be amazing!!!

This sounds fantastic - I'm waiting with bated breath!You must all have had great fun - as well as a lovely meal for your Whodunit Dinner.