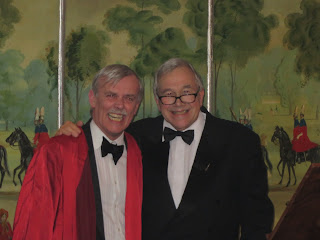 A crime writing friend sent me an email the other day in which she said that 2015 had, for me, been something of an annus mirabilis. Shortly afterwards, a second email from another friend said exactly the same thing. Well, each year has its ups and downs, but they are right; I'll be very lucky indeed if any other twelve month period matches this one for pleasurable experiences. Over the next three days I'll reflect on the people, places and publications that have made this year such a special one for me, and it seems right to start with what always matters most - people. 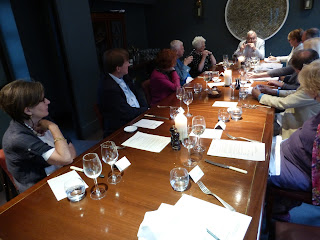 In 2015, I was doubly honoured. Members of the Detection Club elected me as their President, and I owe them a great debt. Above all, I'm grateful to Simon Brett, the outgoing President, who has given me tremendous support. My number one aim is to make sure that the Club continues to flourish, and I have plenty of ideas about how to achieve that. One great pleasure has been taking part in meetings with those Club members who have been co-writing The Sinking Admiral, due to be published next year. Most of the meetings took place in London hostelries, but Simon also organised an unforgettable Whodunit Dinner at the Groucho Club (above photo) when we figured out the solution to our own mystery.

This year I was also elected Vice Chair of the Crime Writers' Association, during an excellent conference in Lincoln. Among those present at Lincoln was Tim Heald, who unfortunately is in very poor health these days. I asked if he thought he'd be able to make it to the Detection Club dinner later in the year, and he said he doubted it - but with a characteristic grin, added: "But I'll be there in spirit." He certainly was. I've enjoyed working with the excellent CWA committee led by Len Tyler - who happens to be one of the contributors to The Sinking Admiral. 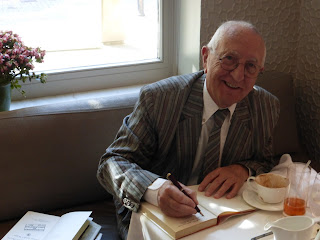 Two lunches stand out in my memory because they were spent in the company of two men I admired as a teenager and have continued to admire ever since. The legendary Len Deighton invited me to Koffman's, and treated me to three hours of fascinating anecdotes about his life and career. Incredibly kind and truly unforgettable. The photo above shows Len in the process of inscribing his first four books to me. Peter Gibbs, playwright, novelist, and former Derbyshire cricketer took me to Vincent's Club in Oxford, and we spent the day together, revisiting  old haunts. I also had the pleasure of meeting for the first time Simon Curtis, director of My Week with Marilyn, who invited me for coffee at the Ivy Club - my first visit there - and a chat about Golden Age books.. 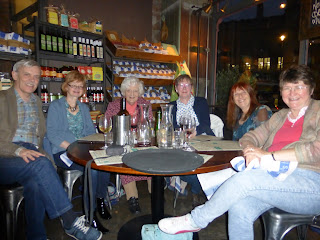 I work with several lovely publishers, and two of my editors, David Brawn of Harper Collins, and Rob Davies of the British Library, took part in the Bodies in the Library conference in June. Jake Kerridge interviewed me about the Golden Age, and Simon and I talked about the Detection Club. The event provided a great opportunity to meet several readers of this blog for the very first time, something I really enjoyed. There are many other readers whom I only know through comments and emails, but I hope that in the coming year, I'll have the chance to get to meet more of you in person.

I took part in panels at Crimefest and the Harrogate Festival alongside such luminaries as Andrew Taylor, John Harvey, Peter James, and Peter Swanson, and got to hang out with some delightful folk, including James Runcie, whose Grantchester novels have been such a hit. The photo above is of a memorable dinner with Catherine Aird, who won this year's CWA Diamond Dagger.

Malice Domestic in Washington DC was terrific. I interviewed Ann Cleeves, the international guest of honour, appeared on a Golden Age panel moderated by Doug Greene, and generally had a great time. All being well, I'll be back there in 2016. I also took part in crime festivals closer to home, in Liverpool, Northwich, and Knutsford, as well as those in Carlisle and Torquay, the latter for the Agatha Christie Festival. I appeared on Sunday Brunch, Radio 4's Open Book  and (believe it or not) a Japanese documentary about Agatha Christie, as well as having the pleasure of watching my Harry Devlin books feature on BBC's Mastermind. 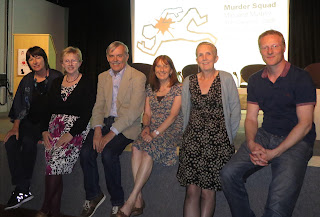 Murder Squad continues to thrive, and we got together at Carlisle in the early summer (above photo) before launching our collection of stories, Starlings, which is edited by Ann, in  Wrexham. Mrs Edwards contributed a story to that book and I hope she can be tempted to do more writing next year. The fact that I'm now only a part-time lawyer also gave me the chance to catch up with some mates from university and school days as well as some much newer friends.

I met - at long last - Roberto and Davide, two Italians with whom I've been in touch for many years, at the Burt Bacharach concert at the Royal Festival Hall in summer (photos below), found that the former owners of my son's London flat, Elaine and English Showalter, are not only distinguished academics but charming dinner companions, and over a pint in a London bar I learned a bit about Austrian academe from a professor I'd first met on a trip around Easter Island, It's always easy to put this kind of socialising with civilised companions off to some unspecified date in the future - but it's so much more enjoyable if you don't. None of us know what is round the corner. Might as well make the most of life right now. 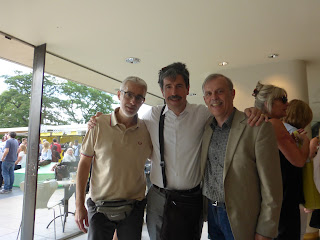 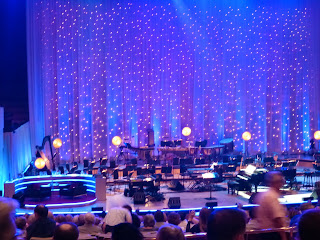 What a flippin' Brilliant year ! How Lovely!
It's nice to read some cheerful news at this time of year .
Best Wishes for a just as fun New Year .

So much achieved and shared with others in the crime writing profession. It was a pleasure and and treat to follow what you have been doing. I look forward to hearing more next year. Many congratulations on your new role as President of the Detection Club. I have known Julian Symons, Harry Keating, Simon Brett and now yourself.