Forgotten Book - Death in the Dusk 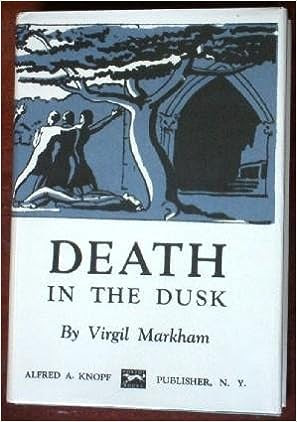 Just a year has passed since we lost Bob Adey, the world's leading authority on locked room mysteries and, more importantly, a lovely man. I thought that I'd remember Bob by focusing, today, and occasionally in the future, on a handful of books from his fantastic collection that I have been able to acquire from his estate. The first, unquestionably a Forgotten Book, is Death in the Dusk by Virgil Markham.

This copy is a terrific one, because it's personally, and very nicely, inscribed by Markham: "For Winnie, who was in at the death". Someone, possibly Bob, has marked the book faintly in pencil to the effect that Winnie was the author's lover. I don't know about that, and I've no idea who Winnie was, but it's a great inscription, and a fascinating book.

Talk about Grand Guignol! This novel is typical of so many Golden Age mysteries in that it was written by a young author who was full of zest. Markham was still in his twenties when he wrote it, and you can tell - because of the exuberance and the energy of the story-telling,as well as in a degree of naivete in terms of over-writing. This is not so much a locked room mystery as a story overloaded with apparent impossibilities, as Markahm piles on the atmospherics so heavily that it makes early John Dickson Carr look positively sedate by comparison.

Victor Bannerlee is an antiquary travelling in Radnorshire, Wales. Markham was American, but like Carr, he was evidently fond of Britain, and he captures the land of legend very well. After a couple of bizarre encounters, he finds himself lost in the fog, and stumbles on an ancient mansion, which just happens to belong to an acquaintance. The house party gathered there, for a wedding, is a motley crew, and the sense of impending doom intensifies with the appearance of a bizarre apparition rejoicing in the name Parson Lolly. The area is steeped in spooky mythology, and a non-stop sequence variety of weird occurrences. There's a splendid plot twist, and I admired the way that Markham disguised it. Over-the-top, yes; verbose, definitely; but great fun

That's useful to know, Ron. Thanks

I've owned several copies of this book over the years and always manage to sell it. I sold a copy of the UK first edition with a splendid DJ to Bill Pronzini many years ago. A scna of the DJ is somewhere on my blog under the old "Jacket Required" feature I used to do every other Sunday. Ever since I've never seen another copy of that DJ nor a copy the UK edition without it for that matter. So I guess it was genuinely rare. Oh well... Anyway, I kept one copy of the US edition intending to read it one day. But a few years ago in one of the many reference books I pore over some enthusiastic critic included in a list of books which all share the same huge surprise ending and now the book is forever spoiled for me. So I haven't read it. Is it worth reading for all the "apparent impossibilities" even if I know the identity of the killer?

If you enjoyed this book I highly recommend you find a copy of Markham's THE DEVIL DRIVES which has a nifty locked room problem that has since been copied by several modern writers. I think Markham was the first to come up with it.