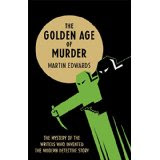 The Golden Age of Murder has been nominated for an Edgar, one of the long-established awards given by the Mystery Writers of America. It's one of five books in the "best critical/biographical" category. Of course, I am delighted. I've been shortlisted for a few awards previously, in my writing and legal careers, and actually managed to win one or two, but of course something as significant as an Edgar nomination comes along rarely if ever in a British writer's life. So the key thing is to savour the moment to the full, which is exactly what I'm doing right now....

I see that, at the Edgar Awards ceremony which is to be held in New York City, that fine writer Walter Mosley is to be acclaimed as a Grand Master. This reminds me that, way back in 1992, when my first novel, All the Lonely People, was one of seven initially shortlisted for the CWA John Creasey Memorial Dagger for best debut crime novel of the year, the award was won (and deservedly so) by Walter for that terrific book, later filmed, Devil in a Blue Dress.

But here's the thing. I didn't even find out that my book was one of the seven nominated books until months after the event. In those days, there was no Twitter, no Facebook, no social media alerting one to such news. The first I heard about it was one day when I was visiting London and I called in at Murder One, the splendid crime bookshop that Maxim Jakubowski used to run in Charing Cross Road. He congratulated me on being shortlisted (Maxim was, and remains, a very well-informed chap, and is nowadays a colleague on the CWA committee), and it came as a complete bolt from the blue. By that time,though, the award ceremony had come and gone. Just shows how things have changed....

Excellent news, and if you don't win it will be a gross miscarriage of justice. Not that I'm biased or anything...

The thing is to be nominated, and twice too. How wonderful. I am sure they would have sent you notification prior to the actual event Martin? Or do you think you'd have continued in ignorance? Thank goodness for social media. I hope you go to the event this time. Well done.

Great news about the Edgar nomination, Martin, and richly deserved. Hope to see your name on the Agatha ballots, too..
Kathy Emerson/Kaitlyn Dunnett

One would expect the organization sponsoring the awards would have had some obligation to notify the nominees.

We'll all be rooting for you, Martin.

I wish I were voting; I'd help you across the finish line as a winner. Best wishes for more prizes and success in all of your creations.

I saw this yesterday, Martin, and was hoping you'd post a blog about it. Hearty congratulations and the best of luck!

Congratulations! On both nominations. One would've hoped they would've dropped you a postcard, at least. Or your publisher might've given you a call.

Thanks so much for these kind comments, everyone. With regard to my story - jokey but true, I promise - about 1992, I think it really is the case that things were done very differently then, and longlists, shortlists and so on attracted much less attention than they do now.

Mr Edwards--I don't think I've ever commented on this site before, but I want to tell you how much I enjoyed the book and how much it has spurred my interest in golden age fiction. I am rooting for you.

Thanks so much, Joe - and great to hear from you.

Martin, I’m so pleased about your nomination for the Edgar. ‘The Golden Age of Murder’ is a classic of its kind, as much so as Julian Symons’ ‘Bloody Murder’. And should you win, as I fervently hope, The Mystery Writers of America will have chosen well.

Best wishes from my partner Maureen too.

Paul (and Maureen) - thank you. I'm hoping to do events at both Alsager and Wrexham on 10 April, so maybe we can get together then.