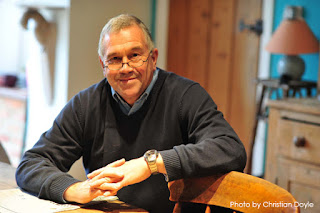 Simon Brett was awarded the OBE in the New Year's Honours for services to literature, the latest honour in a career that has been as busy as it has been distinguished. Only last year, he received the highest award in British crime writing, the CWA Diamond Dagger, recognising a career of sustained achievement.

Simon was educated at Dulwich College (as were such other writers as A.E.W. Mason, P.G. Wodehouse, and, improbably, Raymond Chandler) and Oxford, and after that he enjoyed success as a radio producer with the BBC and also as a writer for radio. His series After Henry transferred successfully to television. At its peak, the show attracted over 14 million viewers, a figure that would be beyond the dreams of TV writers today.

His first detective novel, the splendidly titled Cast in Order of Disappearance, was published as long ago as 1975 (he was very young when he wrote it!) and introduced Charles Paris, the actor and amateur sleuth who is perhaps his best loved character. He's now been responsible for no fewer than four distinct crime series. I'm also a fan of his stand-along novels, such as A Shock to the System, which was filmed with Michael Caine in the lead role, and Dead Romantic.

Simon is a witty and popular speaker. I first heard him speak at a writers' circle seminar in Southport in the late 80s, before I'd published a word of crime fiction, and I was too bashful to introduce myself. Little did I imagine that one day - it was last June - he and I would be chatting together on stage at the British Library, where he gave a terrific reading of "Agatha Christie's will", He's been an excellent President of the Detection Club for the past fourteen years - the toughest of acts to follow, it has to be said - and has masterminded the Club's round-robin novel The Sinking Admiral.  His many friends and fans will be delighted by this latest recognition of his accomplishments.
Posted by Martin Edwards

That's great news! And, as you say, very well deserved. I have enjoyed many of Simon's Charles Paris books, and we loved After Henry on radio (we watch very little television but I think we saw a few episodes). It was a pleasure to meet Simon at the BL conference last year.

I have read many of the Charles Paris books, but just recently read "Cast in order..." for the first time. Hard to believe it was the first - Charles' whole world was already in place.

Thank you for your posting. I'm reminded of yet another superstar in crime fiction that I've somehow overlooked in my limited reading. So, because of your tribute, Simon Brett will be on my "shopping list" when I next visit the local library. Perhaps you can recommend a couple of "must reads" by Brett. Again, thanks!

Although it's been some time since I read them, I loved the Charles Paris books when I ran across them here. I will have to check out some of the other non-Paris books.

So very happy for you! Congratulations"

A hugely enjoyable writer - and a lovely man.

Many thanks for these comments. Simon's honour has been very widely applauded.