Murder at the Manor - and other classic mysteries 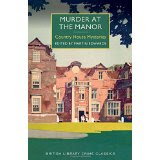 I've just received my author copy of Murder at the Manor, another anthology that I've compiled for the British Library. It will be available in early February. Compiling this book has given me the opportunity to bring together another selection of vintage mysteries. I've adopted the same general approach as for Resorting to Murder, Capital Crimes, and Silent Nights. The theme this time is the country house mystery. There are a few (relatively) familiar authors and stories, and a number of less obvious choices, including a little known, but in my view excellent story by Anthony Berkeley.

Over the Christmas break, The Times published a detailed article about the British Library series, after interviewing John Bude's daughter and me, and listed the top ten bestsellers in the series. Even then, a few weeks after its publication, Silent Nights had reached number seven in the list, and the other two anthologies have also sold many more copies than any of the other twenty-odd story collections I've edited. We're very encouraged by this, and several more anthologies are in the works.

The success of the British Library series is being emulated, and sometimes quoted in the publicity material of, other publishers who are, understandably, keen to take part in the current revival of interest in Golden Age fiction. I'm sure there are many people like me who feel that having so many of these old, and previously hard-to-find, books available again at affordable prices, is very good news.

A particular shout-out for Harper Collins, who - even before the BL series took off - have been doing great work in terms of bringing back books like The Floating Admiral and Ask a Policeman. They have more recently been reprinting Francis Durbridge's Paul Temple books, and have launched the very attractively presented Detective Story Club reprints. I hope to cover one of their titles, The Mystery at Stowe by Vernon Loder, before long. Loder is a writer I've heard good things about for years, not least from my friend Nigel Moss, who has written the introduction. Yet I've never come across one of Loder's books, so I was delighted to read it; the book will be on the shelves in the shops in March. Another book in the series, Freeman Wills Crofts' The Ponson Case, with an intro by crime novelist Dolores Gordon-Smith, will also feature here before too long.

Among the estimable smaller presses active in this field are Dean Street Press, whom I've mentioned several times before on this blog. In the coming months, I'll be talking about quite a few of their titles in more detail, The authors they are publishing include Ianthe Jerrold and E.R. Punshon, and I've just received a copy of a book by the highly obscure Robin Forsythe. It's called "Missing or Murdered".
Posted by Martin Edwards

Wishing you much success Martin. An achievement. I shall look for it.

Well done, Martin, and I hope you have a great deal of success with this. This is just excellent news.

Thanks for these comments. kate, I read your blog review with interest. Margot, I hope you enjoy the book.

I recently read THE GOLDEN AGE OF MURDER and enjoyed it very much, and learned a lot; you manage the many threads nimbly.

I've now gotten this collection and have an immediate gripe — not with you but with the publishers. No page numbers in the table of contents AND no running headers? In a collection of stories? Annoying. I hope that the problem can be, or maybe has been, fixed in following printings. And I could wish that the original publication date of each story were included. Aside from that I'm enjoying the stories, so thank you for bringing them together. (Oh, wait, another gripe that maybe you can use your authority to bring before the publishers: no artist is identified for the charming cover images on this and the other British Crime Series covers.)

Truly, I'll try not to be so complainy a commenter in future.

Delighted that you enjoyed THE GOLDEN AGE OF MURDER, and that you appreciated the narrative structure. It sounds as though the version of MURDER AT THE MANOR that you have is not the final version - I gather there were some problems with the original US version. With regard to the cover images I think these are mainly railway posters, the artists for which are unknown.

Thanks for the courteous reply. Just a few stories to go . . .