A day in North Wales 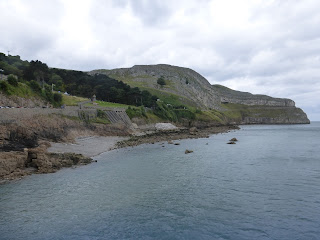 Back in May 2014, I wrote about The Great Orme Terror a truly eccentric Golden Age thriller, and on Friday I took another look at the Great Orme itself, the scene of such sinister goings-on in Garnett Radcliffe's novel. The occasion was a quick trip across the border to North Wales, to take advantage of the last bids of summery weather. 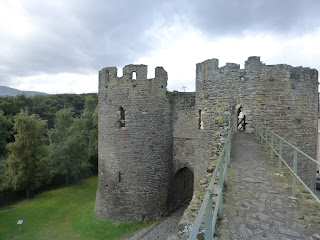 I've mentioned previously that I'm surprised by the paucity of detective novels set in Wales, and in particular North Wales. I can't call to mind a single story that is set on the appealing island of Anglesey, for instance, nor of any books set in Conwy - where on Friday I wandered for a while on the ancient walls, as well as around the narrow streets and along the river shore. It's a lovely town. 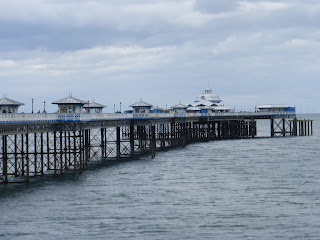 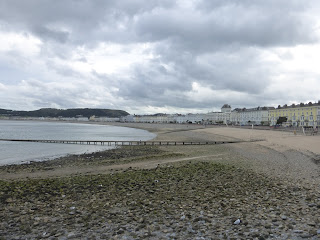 So too is Llandudno, a "model resort" with a terrific pier (it got rather windy on Friday!) where the seagulls regularly swoop down to nick people's ice creams. Llandudno's benefited from a lot of investment in recent years, and I was impressed to see plenty of "no vacancies" signs in hotels, even though the school term has started. Alice Liddell, of Alice in Wonderland, once stayed in the St Tudno's Hotel on the front (where my wife and I also stayed many years ago) and quite a bit is now made of the Alice connection. 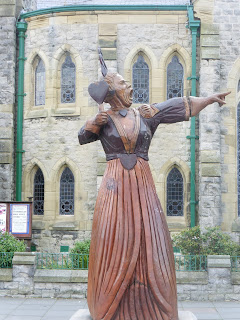 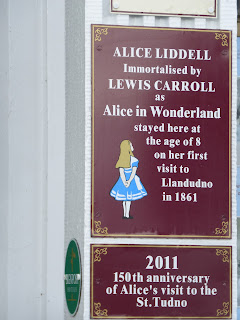 Final stop of the day was Colwyn Bay. This was very much a nostalgia trip for me, as I spent numerous childhood holidays there. Sad to say, the Bay Bookshop on Sea View Road has gone after 40 years, a victim of internet competition; it was one of my favourite second hand bookshops. Even the hotel where my family used to stay has been bulldozed. But the visit did bring back many memories, and I'm tempted to set a short story there.
Posted by Martin Edwards

Good to see you’ve been venturing into the Principality again. My home turf now, of course, as Maureen and I live just over the border in Shotton, on the Dee Estuary. We’ve also enjoyed wandering the ancient town walls of Conwy and braved the elements (and seagulls!) on Llandudno pier.

Flint Castle is just up the road from us and you should take a look at it sometime. Overlooking the Estuary, and built by Edward I in 1272 to strengthen his hold over Wales, the castle has a turbulent past but is now a well preserved ruin haunted by zipping swifts in summer and screeching gulls all the year round. Very atmospheric, and likely to spark your crime writer’s imagination, I should think!

On Saturday we visited Llangollen in Denbighshire, where the International Musical Eisteddfod is held every July, and enjoyed – as I’m sure you would – sauntering along the Victoria Promenade beside the rushing Dee. Wonder if there’ve been any Eisteddfod murder mysteries yet?

I do hope you’ll get around to writing the Colwyn Bay short story.

Hi Paul. Yes, I know Flint Castle quite well. Ewloe and Dolbadarn too! Great places to roam around. Llangollen - I did the steam train trip in July and loved it. But I haven't come across an Eisteddfod mystery as yet!

This is so nostalgic for me - like most Liverpool people, we went to North Wales a lot for days out and so on, and Llandudno and Conwy are well-known to me. I may have to track down the Orme Mystery.

It's a barmy book, Moira, but fun to read, especially as you know the area.