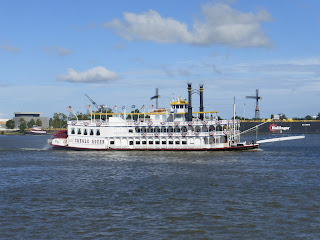 I'm back from an exhilarating and unforgettable Bouchercon in New Orleans - wow, what a city, what a convention! So many highlights, so many wonderful experiences. Among them was receiving from Mystery Readers International the Macavity award for "Best Mystery-related Nonfiction" for The Golden Age of Murder. This is the 30th year of the Macavity awards, and previous winners in this particular category include such stars as Harry Keating and P.D. James. The very first winner, back in 1987, was 1001 Midnights by Bill Pronzini and Marcia Muller., a hefty volume which I've consulted countless times. 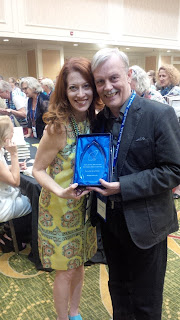 The above photo, taken just after the ceremony, shows me with Sharyn Rosenblum, Publicity Director of William Morrow, part of the Harper Collins group.I last had the pleasure of meeting Sharyn on another utterly memorable evening, back in April, when I received the Edgar award. In all, The Golden Age of Murder has now received four awards, three of them in the United States - an achievement that I'd have found impossible to believe had anyone predicted it during those long, long years when I was writing and revising the book, and wondering if anyone would ever want to read it, let alone publish it. 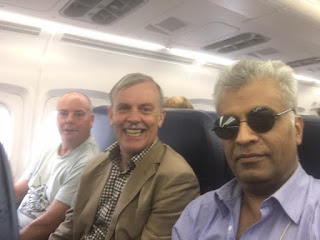 But let's begin at the beginning. I flew out from Manchester to Atlanta, and after boarding the plane to New Orleans, who else did I see taking their seats but two old mates, Ali Karim and Mike Stotter. We managed to get seats together, and on arrival at New Orleans airport discovered that, in this most extraordinary of cities, it was cheaper for the three of us to take a stretch limo to our hotel than to travel by airport shuttle or taxi. Well, it would've been rude not to seize such an opportunity, so we made our entrance in suitably surreal fashion. 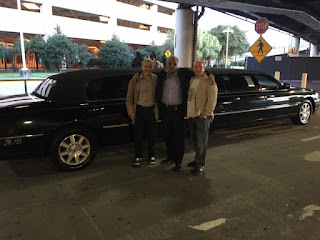 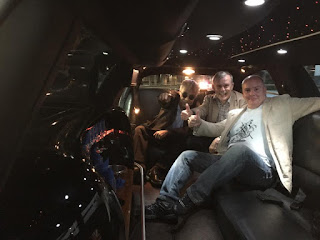 I'd arrived in good time, so there was a chance to pack in some sightseeing before the convention began. I revisited the fabulous French Quarter, visited the cathedral (photo at the end of this post) and also, on the recommendation of several friends, toured the Audobon Aquarium, which is really impressive (sharks, piranhas, jellyfish et al - see below photos), before dining with Peter Rozovsky, of the Detectives Beyond Borders blog, my moderator for a panel first thing on Thursday morning. Then followed a fun party away from the convention centre, hosted by Kristopher Zgorski of BOLO Books. And, thank goodness, I managed not to oversleep and miss my panel. 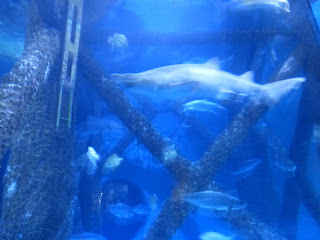 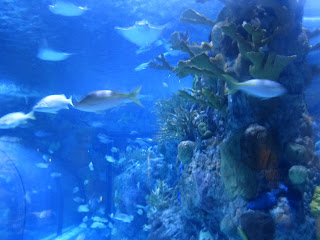 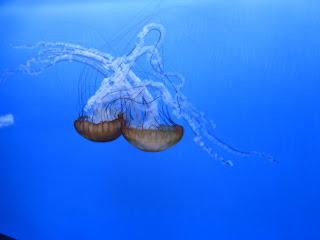 Even at 9 am, there was a packed audience. Fellow panellists included Gary Phillips, and we were delighted to see the legendary Walter Mosley in the audience. Our subject was pulp fiction, but Peter was happy for me to talk about the magazine stories of that great British writer Michael Gilbert. About 1900 people were registered for the convention, and it was good to spend time with a number of old friends before the opening ceremonies, when the Macavity award was announced: here's a shot Ali took of me with fellow nominee from Norway, Jorn Lier Horst, and Mike. 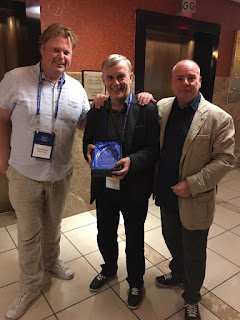 The rest of the convention passed in a happy whirl, which included breakfast with super-fans Bill and Toby Gottfried, dinner with Janet Hutchings of Ellery Queen's Mystery Magazine (just celebrating its 70th birthday) and guests including Hilary Davidson, Laura Benedict, and Charlaine Harris - see the photo below. Other highlights included coffee with Shelly Dickson Carr (grand-daughter of the locked room king John), lunch with Shawn Reilly Simmons, now a crime anthologist as well as a rising star novelist, the Anthony Awards, for which I was shortlisted in a nonfiction category won by Val McDermid, and dinner with Steve Steinbock of EQMM, author and actor Kathryn Leigh Scott, and John Pugmire of Locked Room International. John has involved me in an exciting new publication, of which more news in due course. 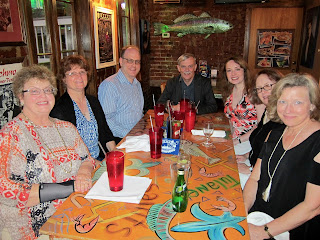 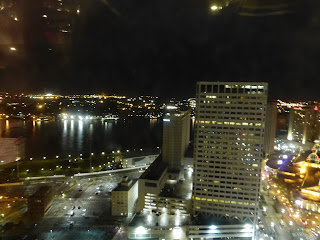 I moderated a second panel, on Golden Age mysteries, first thing on Saturday morning. Even in a large room, it was standing room only, a sure sign of the enthusiasm for GA fiction - especially given the competing attractions of the city and various other panels running at the same time. Cathy Ace, Ragnar Jonasson, Charlaine Harris, Claire Booth, and G.M. Malliet provided the audience with pithy and witty insights into the subject, and the only sad thing was that we couldn't go on for another hour. Thanks to Art Scott, whose The Art of Robert McGinnis I've just started reading, for this photo: from left to right - Ragnar, Charlaine, Gin, Claire, Cathy, and me.

There was more, much more, that one could say about such an exciting few days, but suffice to say that, if you're a crime fan who has not, so far, attended a major crime convention, then I think it's almost certain that you'd enjoy yourself hugely if you did so. And fellow convention-goers will, I'm sure, agree that the benefits of attending are cumulative - the more you do, the more you get out of them. It's now 26 years since I first attended a Bouchercon, at London in 1990, before I was even a published crime writer. A lot of water has flowed under the bridge since then, but I'm profoundly glad to belong to such a generous and giving community.  . 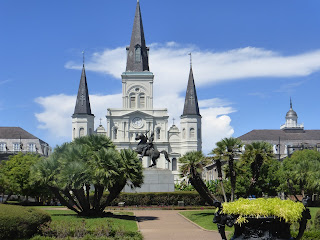 Oh well done on the award!
It sounds like you had a brilliant tome :o)

Martin, it was a great conference and nice to meet you in person, however briefly. The one thing that surprised me was that your persona as a panelist and moderator was a bit more droll and mischievous than your blog persona here. An added bonus!

Congratulations again on the recognition you've received for The Golden Age book, and I hope all your readers here will now work on promoting your own fiction.

Thanks, Val. Yes, it was really fantastic. Amazing location, too.

Hello, Seana. Yes, it was a delightful surprise to meet you, and I'm only sorry we didn't have a longer chat. Next time, perhaps? I think it's perhaps right that I'm not too mischievous on the blog - it's easy to be misinterpreted, a risk that my inner lawyer is averse to!

It was good to see you, Martin. Glad you encouraged me to come to Bouchercon. It's been great. I didn't congratulate you on the Macavity so I do so now! I'm still sightseeing in New Orleans, until Friday.

Glad you're enjoying it, Frances! Incidentally, a friend from schooldays has told me how much she is loving your books.

A most enjoyable post, Martin. Great pics. One grin shines out of course, though I doubt many other Cheshire Cats have won a Macavity! Congratulations on your fourth award for ‘The Golden Age of Murder’. It’s a brilliant book and a must for all crime fans.

Look forward to hearing about the new publication John Pugmire has involved you in.

Thanks, Paul. I like that Cheshire Cat line! The new publication is really interesting, for all sorts of reasons. More soon.