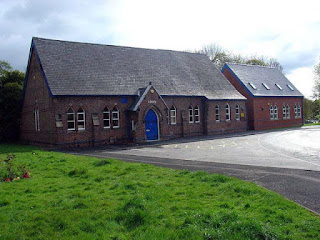 For once, I'm not contributing today to Friday's Forgotten Books. Instead, I'd like to talk about a meeting I went to last night to discuss the fate of a village library - my village library, Lymm. A parochial subject? Not really. I feel the discussion raised issues relevant to all lovers of libraries everywhere. The issues and challenges vary from place to place, but a common factor is the vital contribution that libraries make to all communities, and to social cohesion within those communities - a contribution that is under serious threat.

The meeting was part of a consultation about the future of Warrington's libraries, conducted by LiveWire, a not for profit company which runs the borough's libraries, leisure centres and some related activities. The council is cutting funding, so money has to be saved from the budget for the borough's sixteen libraries. At the last minute the meeting was relocated from the library to Lymm Hotel because of the intense local interest. In the end, about 150 people crammed into the room to listen to managing director Emma Hutchinson and her team put forward their proposals.

In my other life as an employment lawyer, I've been involved in many restructuring exercises, acting for both employers and employees, and my impression based on that experience was that this was a genuine consultation exercise rather than a sham preceding an announcement of a fait accompli. Not everyone thought the same, especially since, having cited a failure to sublet vacant areas of the building that houses the library as key to their concerns, LiveWire couldn't give figures, when asked, as to the amount of the shortfall in rent. But I believe one has to trust in the good faith of people unless and until it becomes naive to do so..

The news was, however, appalling. The much-loved library is threatened not with a cut in opening hours but with total closure. We were told that libraries have to change (and of course all things need to change over time) but the option of Lego-style "lending lockers" for the supply of library books and a twice a year visit from a travelling themed library failed to win hearts and minds. When it was pointed out that disadvantaged people in the village would suffer, especially since public transport to the centre of Warrington is dire, the suggestion that the bus company might be persuaded to improve the bus service met with incredulity.

The proposals involve focusing resources on a few hubs elsewhere in the borough, but for the people of Lymm, especially young parents, the disabled, and the elderly, the proposal to close the library amounts in reality, whatever the intention, to an attack on a community and above all an attack on its most needful members. Shrewd questioning elicited the fact that Lymm library borrowings (along with those in the equally threatened neighbouring community of Stockton Heath) are the highest in the borough, and the £65k annual cost of running the library equates to the cost of employing (let's say) just one senior-ish local government executive.

I don't underestimate the difficulties in the current climate. But - trusting as I do in that element of good faith - I'm hoping that the passion shown by villagers at the meeting will lead to a total  rethink, so that the premises are fully utilised and that the part played in village life by the library is broadened and enhanced, not wiped out. LiveWire's slogan is "Live well with LiveWire", but to close the library would not only destroy that reputation, but more importantly destroy a community institution of great worth and - I'm sure this is true of libraries generally - even greater long-term potential.
Posted by Martin Edwards

Libraries are a gateway to success and a positive force in every community. Let's hope yours remains both open and strong.

Here is a link to a post from last week on Lesa's Books blog. The discussion was the changing functions of libraries--from a mainly American perspective, but apparently things are just as dire in England as here. https://lesasbookcritiques.blogspot.com/2016/09/thoughts-on-reading-bookshop-on-corner.html?m=1

Thanks, Jerry. Much appreciated.

Deb, thanks. Very interesting - it's a problem without frontiers, I'm afraid.

I'm sitting at this moment the Gloucester County, Virginia, main library (there's a satellite branch down county, and a bookmobile that visits outlying areas), which suffered a budget cut in the county's current appropriation. Our biggest fear was a forced closure on Sundays, but this was averted by other cost-saving measures. I believe the shortfall was around $40,000. Our library system has become aggressively proactive in adapting to community literacy needs, hosting classes, tutoring sessions, art shows and other programs to attract visitors, many, I suspect, for the first time or who have lost the habit and inclination to look to the library as a valuable resource. We have computer a couple dozen computers, available for free usage, as well as free wifi for patrons who bring their own tablets and laptops (such as me). With the economy seemingly everywhere in doldrums without much prospect of improvement in the foreseeable future. it has become more important for a public library to toot its horn frequently to simply remind its community that it is there. It is sad to learn of your library's peril, Martin, and I hope your community can somehow avert what would be a tragic loss.