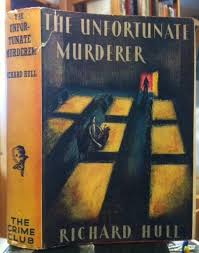 Richard Hull was the name under which R.H. Sampson, one of Britain's few crime-writing accountants, wrote rather unorthodox fiction for roughly twenty years. To some extent, he was influenced by Anthony Berkeley/Francis Iles, but his work was often rather original and unpredictable, and as I mention in The Golden Age of Murder, it even attracted the attention of Jorge Luis Borges.

My Forgotten Book for today is a Hull novel written and set during the Second World War. The Unfortunate Murderer (1941). It begins very well, with the scene set by a government auditor who has been sent to a munitions factory, only to stumble across a murder. Hull's wit, displayed as early as the Acknowledgements page at the start of the book, is in evidence at times, but he does not indulge his taste for irony as extensively as in some of his other novels.

The murder is quite cleverly contrived, but the story does, I regret to say, become rather bogged down, and a thin and frankly uninteresting espionage sub-plot doesn't help. On the whole, I was more taken with the portrayal of business life - something Hull knew rather more about than some of his fellow Golden Age writers - and the wartime background. The factory is based somewhere in north Wales, unspecified but possibly in the vicinity of Wrexham, which is definitely an under-used location in the genre. But the solution to the killing was,for me, a let-down.

This isn't a book that has ever been much discussed, but a contemporary review in The Spectator said it was "nearly very good"and praised the freshness of the writing. Despite my enthusiasm for Hull, I think this errs a little on the side of generosity, but even his minor and less successful mysteries usually offer something of interest, and I found it a quick and agreeable read. But the book he wrote just before this one, My Own Murderer, is definitely superior.
Posted by Martin Edwards