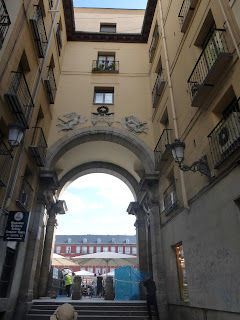 By a happy accident of timing, just as "Storm Doris" was heading for the UK last week, I was sneaking off to sunny Madrid. I was invited by the University of Madrid CEU to talk about the revival of interest in Golden Age fiction, and kick off their latest Congress focusing on G.K. Chesterton, but also covering Agatha Christie, Georges Simenon and other greats of the genre.

This was quite an honour and slightly daunting, not least because I'm rather overwhelmed with Things to Do Urgently this year. So I did hesitate about accepting, but in the end I agreed, and boy, am I glad I did. It was a great trip, splendidly organised, and I must give special thanks to Pablo Carreras for setting everything up so pefectly.

In case anyone is wondering, my mastery of the Spanish language is non-existent, so I delivered my lecture in English. I was pleased by the range and quality of questions from the audience, several of which were truly thought-provoking. And I was also glad to meet some very interesting people, not least the second speaker, Dominique Meyer-Bolzinger, an expert on Sherlock Holmes amongst other things. Pablo also organised a terrific lunch which, in true Spanish style, lasted a long time, and was highly convivial.

I'd arranged to meet, for the very first time, a Facebook friend, Jose Ignacio Escribano, who blogs at A Crime is Afoot. Although I have some reservations about Facebook, it is a wonderful way of connecting people who are geographically separated, and it was a delight to meet Jose Ignacio. He took me on a tour of Madrid, including second hand bookstalls and the atmospheric Cafe Gijon. It's always fascinating to get an insider's view of a place.

We parted quite late in the evening after a day that had for me been rather memorable and hugely enjoyable. As I went back to my hotel, I reflected that when I was working full-time as a lawyer, it was impossible for me to take part in events such as the Congress (not that I was invited to many, to be honest!) I feel very fortunate that my career has moved in the direction it has. And to be invited to talk about the Golden Age by a university in a country where, perhaps because of the political climate in the era of dictatorship, the detective genre didn't really flourish until modern times, really was quite something. .
Posted by Martin Edwards

Sounds terrific, and how nice that you got the chance to meet up with Jose Ignacio. I visited Madrid for the first time a few years ago, and loved it.