The Golden Age of Murder in paperback 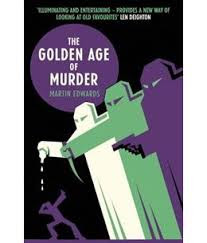 Tomorrow marks a milestone in my writing career, as The Golden Age of Murder appears in paperback in the UK for the first time, not quite two years after the original hardback publication. To say that this has been a lucky book for me is an under-statement. In terms of sales, reviews and awards, it's far surpassed even my most optimistic expectations.

I'd never have dreamed, for instance, that it would be translated into both Chinese and Japanese, yet that is exactly what will happen this year. In terms of both the number of reviews and their content, the reaction has been amazing- not just in the UK and US, but also in places such as Sweden and Australia. And I've recently been invited to talk about the Golden Age at literary festivals in such unexpected locations as Madrid and Dubai.

During the course of last year, the book picked up three awards in the US - the Edgar, the Agatha and the Macavity, and in the UK it earned the H.R.F. Keating award. For good measure there were two shortlistings - the Anthony award at Bouchercon, and the CWA Gold Dagger for non-fiction (which has never been awarded to a book that was a sort of reference book rather than a conventional true crime book). Attending those events was quite a surreal experience, but extremely gratifying.

Equally pleasing have been the shoals of emails and other messages I've had from readers who have enjoyed the book. Of course, I hope the paperback will reach an appreciative readership. And for those people who have asked me how I can follow up this book, my answer is - do look out for The Story of Classic Crime in 100 Books, which the British Library will publish in a few months' time. it's a very different book, but it's also one I'm proud of..
Posted by Martin Edwards

Congrats Martin (but I'm sure you've heard it all before by now) :)

Another golden milestone, Martin! Of course you must greet every new achievement with great satisfaction but I wonder....do you have any twinges of regret that you are becoming best known as an Authority rather than an Author? You must have started creative writing because you wanted to create and have now turned into a researcher: any pangs about your characters waiting for you to breathe new life into them?

Is there any way for those of us who bought the hardback to find out what updates were made to the paperback edition?

Fiona, it's an interesting question. I am totally committed to writing novels, even though that has slowed down of late. But I've produced quite a few short stories, which i enjoy writing very much. Overwhelmingly I feel thankful that I'm getting published, and that I seem to be reaching a wider readership with both fiction and non fiction than in the past. I feel the success of the GA book has benefited me as a novelist as well as generally.

Ted, there are quite a few changes, but they are mostly a matter of correcting printing errors (or my mistakes) and adding a few small bits and pieces of info that came to me later.

I have the hardback of this on my TBR shelf and plan to read it soon. Can I also just say how much I love your Lake District series of books? Sadly, I only have one left to read so I do hope you plan to write more at some stage.

Thanks, Cath. There will definitely be more of the Lakes books. I have a plot in mind, though not a word of it has yet been written up....

I’d long anticipated your elevation from mid-lister status, and I’m not at all surprised you’ve made it with ‘The Golden Age of Murder’, a most brilliant book on the genre. I’m looking forward to ‘The Story of Classic Crime in 100 Books’ now.

But your fiction is terrific too and I’m really hoping your Lake District mysteries will make it onto the small screen before too long. Hoping you’ll re-visit Harry Devlin as well someday – what a character!

Very kind, Paul. I'd love the TV thing to happen, but translating options into something that actually appears on the screen has proved far from easy. But you never know what tomorrow will bring. Meanwhile, I press on and try to develop as a writer.

Congrats yet again! Looking forward to the new study...

Dan @ The Reader is Warned said...

Super excited to read this! Great and important work!

J, Dan, thanks very much!