Forgotten Book - You Play the Black and the Red Comes Up 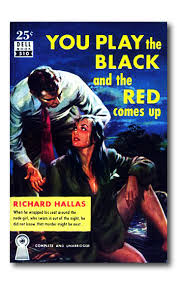 First published in 1938, You Play the Black and the Red Comes Up, is a classic of hardboiled American crime writing. Yet the author, Eric Knight (who originally published the novel under the pen-name Richard Hallas) was an Englishman, born in West Yorkshire. It was his one and only contribution to the crime genre prior to his untimely death in 1943.

It's a first person story, and the narrator's wife abandons him in the very first paragraph. He immediately leaves home and heads off to southern California n search of her, and his young son, but to no avail. My main reservation about the story was that, having yearned to find his son, our hero then more or less forgets about the child, as his life takes a dramatic series of turns. This didn't quite ring true, but it didn't spoil my enjoyment of the book.

The narrator (an army deserter) gets embroiled in a crooked scheme, but manages not only to escape justice but to turn his ill-gotten gains into a small fortune - by mistake. He still squanders the money on his new lifestyle with a woman called Mamie who is enraptured by his good looks and affable, easy-going personality. He's really not the tortured hero you might expect to find in a book of this kind.

This book has its detractors: they include Edmund "Who Cares Who Killed Roger Ackroyd?" Wilson, whose views on crime fiction were so often crass that to earn his disfavour was almost a badge of honour. But it also has many admirers, and I'm one of them. I like Knight's wit, and his ability to take his story in unexpected directions. Oddly enough, he's best remembered as the creator of Lassie, but he deserves to be renowned for his solitary contribution to crime fiction. What a shame he was killed while serving in war-time, when his plane crashed in Suriname.

This novel does take some turns. I remember when I read, I mostly thought, "Wow, California has been crazy FOREVER."