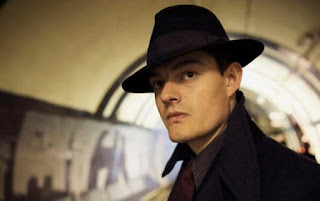 SS-GB, one of the most renowned books by the justly renowned Len Deighton, was first published in 1978. The first episode appeared on BBC TV tonight, so it's taken a very long time to reach the screen, but it was definitely worth the wait. We were treated to a gripping, multi-layered storyline, packed with action but also including scenes that were poignant.

The premise is that Hitler won the Battle of Britain, and the action takes place in 1941 with the Germans in control of London, while a Resistance movement fights a desperate but apparently hopeless rearguard action. Superintendent Douglas Archer (Sam Riley) is called to investigate the murder of an elderly man in rather peculiar circumstances. A mysterious American woman approaches the scene of the crime, and Archer discovers that she is a journalist. But her interest in the crime is puzzling.

Archer is conducting an affair with his secretary, who is involved with the Resistance movement. He is a widower with a young son, and by the end of the first episode, his son's safety is under threat. He is also troubled by the arrival of a tough German police boss, which suggests that the murder he is investigating has sinister and far-reaching ramifications.

Part of the reason why I found this episode gripping is that the authors of the script, Robert Wade and Neil Purvis, have mastered the large-scale thriller, having written several James Bond films. And the acting is excellent. But the greatest strength is the source material. Along with John Le Carre, Len Deighton defined the British thriller in the second half of the twentieth century. He is a very exacting writer, and there is a depth to his work that one simply doesn't find in the majority of thrillers. I am very much looking forward to future episodes of SS-GB.
Posted by Martin Edwards

If only they had made it audible, though...

Christopher, I have to admit that I did turn the volume up!

I confess to being under-whelmed with this. Not a patch on The Night Manager. A member of the resistance suddenly blurting everything out in the middle of the street as Sam Riley's character's way into that side of the plot was also not very believable. Great sets though and enough for me to want to watch next week.

Good to hear from you, Juxtabook.

I haven't read the book, but actually enjoyed the first 2 episodes. I didn't have a problem with the sound either!

I can't think of any modern historian who can conceive of the Nazis occupying the United Kingdom in WW2.
At the time the Battle of Britain was seen as' a close run thing', but in retrospect, no-one has come up with a plausible scenario that gives victory to the Luftwaffe.
Even if they had achieved air superiority, the Germans would have faced a powerful British Navy which would have eliminated any cross-channel invasion force.

That is why Fatherland by Robert Harris is a more plausible concoction. The United Kingdom , closely allied to America, remains outside the Nazi Empire, .

Having said this, I read SS-GB when it first came out. There is a brilliant and memorable moment in the book, but I will avoid spoilers. I am keenly following the TV version.

William Goldman referred to 'reversals' in his book on the Screen Trade. In my opinion, Deighton is adept at such reversals and SS-GB is an impressive example.