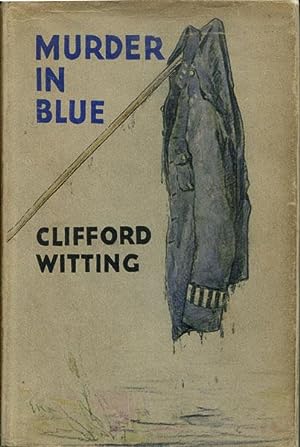 Murder in Blue, published in 1937 by Hodder & Stoughton, was the first detective novel of Clifford Witting. It was an auspicious debut, proclaimed by Hodder as "a first-class detective story...about the murder of a policeman". It's interesting to compare the first edition of this book with first editions written by debut authors today. Now, readers are always presented with information about the author. Publishers are keen, almost to the point of obsession sometimes, to focus on an author's "platform", i.e. the means by which, it's thought, he or she can attract readers. It was very different in 1937. We are not told a word about Witting.

So who was he? I don't possess a lot of biographical information but I do know that Clifford Witting (1907-68) was educated at Eltham College and worked for many years for Lloyds Bank. He enjoyed a long career as a crime novelist, spanning 27 years, but was much less prolific than many others who started during the Golden Age. In that time he published sixteen novels. Quite possibly, like Cyril Hare for instance, his day job reduced his literary output. But lack of productivity is no bad thing if it is matched by a corresponding increase in quality. He wrote accomplished traditional mysteries and in 1958 he was elected to membership of the Detection Club, a sign of the esteem in which he was held by fellow practitioners.

Nick Fuller writes about Witting on the excellent gadetection site, and asks why he is so obscure, given the engrossing nature of his stories. It's a good question. I missed out on Witting for many years and it was only because of the advocacy of Nigel Moss, an excellent judge, that I sampled him. I'm glad I did, because all the books of his that I've read have merit.

Narrated by a likeable bookseller, John Rutherford, and set in a thinly disguised Sussex, Murder in Blue introduced Detective Inspector  Charlton, who was to become a series character. There's more focus on characterisation and setting than you find in, say, most of the Freeman Wills Crofts books, and definitely more humour. Witting was witty! The story begins extremely well thanks to Witting's smooth narrative style, although I felt it sagged in the later stages. Overall, however, a decent start to a career of under-valued accomplishment.

According to Amazon his 1939 book, Catt Out of the Bag, will be republished in paperback this November.

I would love to see British Library Crime Classics reprint this one or The Case of the Michealmas Goose (1938).

I have 3 Wittings including Murder in Blue (plus The Knights of St Perran, which I have enjoyed for over 60 years) and would love to read more. Having discovered from Amazon listings that he co-authored several English language textbooks with Ronald Ridout, whose name I remember from my own schooldays, I had assumed he was a teacher; I wonder how that partnership came about?

I've read "A matter of nerves", by Clifford, and i've found it superb. It is a whodunit set in a little village, with really good charachters. What is actually original is the fact that the tale is told by the muerderer, something that you know from the beggining. What you don't know is who the murderer is. A really nice story.

A Matter of Nerves is actually by Richard Hull