A return visit to The Crooked Shore 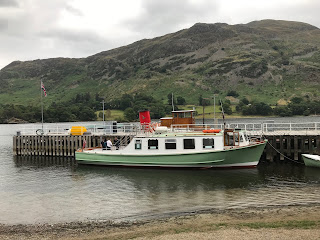 A full day trip to the Lake District - at long last! I was glad to take advantage of a fairly positive weather forecast to take another look at one of my favourite areas in the world, and some of the settings for The Crooked Shore. I have a vivid memory of the day I discovered the tiny village of Aldingham on the south coast of Cumbria and realised that it would make a perfect setting for the story I had in mind. I made a few changes, transplating a manor-converted-into-flats from north Wales to Cumbria, and introducing a few topographical changes, but Aldingham was certainly inspirational and it was good to go back. 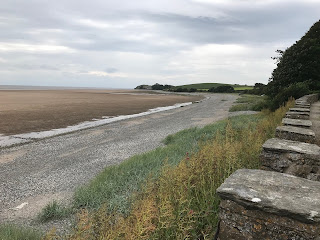 I also took a quick look at Bowness, home to Kingsley Melton, who plays such a key part in the story, and also the place where Ramona Smith was last seen more than twenty years before the action of the story begins. After that, we drove through Ambleside to Grasmere for lunch at the Swan, where a few years ago I had the pleasure of giving a talk to a group of American visitors which included my dear friends Caroline and Charles Todd, who were researching for one of their own novels. 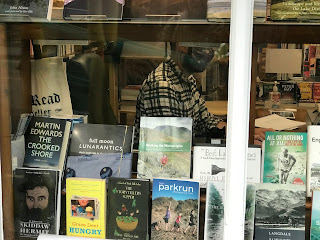 A walk into Grasmere village naturally took me to Sam Read's brilliant bookshop. There was a long queue outside, so I didn't go in, as independent shops need all the customers they can get without being interrupted, but it was heart-warming to see so many people so eager to look for books. And very gratifying to see The Crooked Shore in the window!

After that, a lovely trip over the dramatic Kirkstone Path to Ullswater, where the events of The Frozen Shroud take place, and Pooley Bridge - and my first sight of the new bridge, built after floods destroyed the old one. I was startled to realise that it's more than six years since I was last there on a research trip, but again it was good to see how busy everywhere was and I hope this means that the economic impact of the pandemic is being mitigated to some extent. It will be a while before I write another Lake District book, since I have a contract to produce two more Rachel Savernakes, but this trip was a reminder of what  a gorgeous and inspirational part of the world it is. Great to be back, and a great way to celebrate the new book, which incidentally has been Cumbria Life's book of the month.