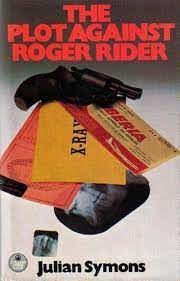 After finding A Sort of Virtue, Julian Symons' final novel, rather a let-down, I went back to one of my favourites among his eclectic works. This is actually the third time I've read The Plot against Roger Rider. First time around was not long after the original publication in 1973, and the plot twist blew me away. The second time was twelve years ago and resulted in one of my early Forgotten Book blog posts. Rather than rehash what I said before, let me take a fresh look at the book's strengths and weaknesses.

The latter were hinted at in Edmund Crispin's review in the Sunday Times, which found 'too many abrupt changes of viewpoint, and a certain amount of peripheral material which seems perfunctory'. Because the story is told from numerous different perspectives (with bits of omniscience added to the mix as a means o building suspense), it isn't easy to find someone to identify with, though young James Paradine eventually emerges as an effective amateur detective. One character's preoccupation with the Russian Royal Family doesn't add anything to the story, an example of that perfunctory peripheral material Crispin mentioned. There's also a brief passage where Symons slips into the present tense for no apparent reason. Today, I think, the main weakness is the treatment of sex and sexual orientation. In this respect, the story seems dated and unsatisfactory.

In Symons' defence, some of this arises from his use of sexual attraction between characters as a means of misdirecting the reader from what is really going on. And as Crispin says, the novel offers 'considerable rewards - audaciously intricate contrivance, lucid, sinewy prose, characters who spring to life with the first sentence they utter, variegated backgrounds (London, Spain, Sardinia) and a stimulating shock ending whose only fault is that it is possibly a little too frailly prepared.' Is this last remark fair comment? Arguably, but on the whole, I'd say the preparation is sufficient, even though the hints about the truth are rather oblique. The characterisation, as often with Symons, is crisp and generally effective, while the presentation of Spain under Franco is rather interesting.

When reading the book this time, I've focused on the craft of the writer, trying to figure out how Symons set about putting together the disparate ingredients of this complicated mystery.I don't want to give spoilers, because it's a novel well worth reading and the final twist is definitely gasp-inducing and memorable, but my guess is that two of the real life crimes referenced in the text provided important raw material, and that the key concept was that of a 'biter bit' conspiracy. If that's right, he will have had his solution in mind at the outset, and then had to make decisions as to how to build up interest in the relationships between the central characters. I sense that he may have struggled with this - he wasn't entirely happy with the book - and this explains the faults that Crispin identified. But having read the novel three times, I remain a fan.

Martin, apologies for a second contribution on the same occasion.

I’ve only read “The Plot Against Roger Rider” once and that was back in the seventies. I remember being offended by the comments on homosexuality; doubly so because, for some reason, I expected better from Mr Symons. Since then I have wondered if he was being satirical. Perhaps I should re-read it.

No need to apologise, Michael, your comments are extremely welcome. I have to say that I think the whole handling of sex and sexual interest in the book is by far its weakest point. I suspect that Julian Symons was aiming to be cutting edge at the time, but now the attitudes seem very dated indeed. You find something similar with his treatment of race in some of his books. There is a touch of satire, definitely, but this aspect of the book doesn't really work in my opinion. As a mystery, however, I think it's a good one.