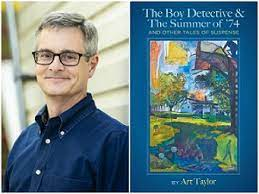 Over the past few years, I've valued the friendship of the American writer Art Taylor, who is not only a novelist but also a highly distinguished, multi-award-winning author of short stories. My guess is that the time is coming, if it hasn't already arrived, when Art will be hailed as the finest American author of crime short stories since the great Stanley Ellin. Like me, Art is fascinated by the craft of crime writing and I was thrilled when he offered to contribute a typically thoughtful piece about writing short stories. Here's the first of two instalments:

'My essay “The Short Mystery” for How to Write a Mystery: A Handbook From Mystery Writers of America focusses on three principles as guidance for writing short mystery fiction: economy, efficiency, and focus. So my suggestion here might seem contradictory: To write successful short fiction, write long.

More by accident than by design, the first drafts of my own short stories are frequently significantly longer than the final versions. The earliest draft of my story “The Boy Detective & The Summer of ’74” was only 3,500 words (back in 1994!), but it ultimately ballooned into a major strand of an abandoned novel, then into a standalone novella, and finally into a smaller tighter novella of 11,000 words—the version ultimately published last year in Alfred Hitchcock’s Mystery Magazine. Another story—“Mrs. Marple and the Hit-and-Run”—began as a 10,000-word story, but when I read the original draft aloud to a beta audience, I felt its bloat and sluggishness. The final, published version clocked in at a sleek 2,500 words.

A key point, however: In reducing a strand of a novel to a shorter novella and in cutting 75% of that second story, I didn’t ultimately delete any of the major components of the earlier drafts. Those elements remain—hinted at, gestured toward, folded in at the corners—and I think (hope!) each published story is stronger precisely because of the words that were discarded.

Writing long helps to “flesh out” (that worn-out phrase) some of the skeletal aspects of a draft, enhancing an understanding of the characters, of their wider world and their place in that world, and of the longer chain of events both before and after the main action of the story. More, more, more in all directions—hopefully toward the richness and complexity of the readers’ experience too.

However—and it’s a big however—the short story doesn’t ultimately succeed on the concept of more more more but on those principles of economy, efficiency, and focus.

So how does more become less? And how can that less do more? Thanks to my host Martin Edwards, there’s a Part II of this post ahead, addressing just those questions.'

Thanks again for hosting me, Martin--and for the kind, kind words on my own stories! I'm honored!