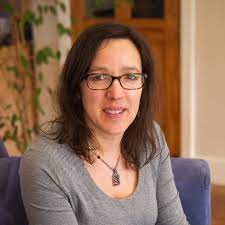 When I was Chair of the CWA, I enjoyed meeting members up and down the country, and among them was Abi Silver (pictured), whom I met at a very pleasant regional chapter lunch. She is a fellow lawyer as well as a crime writer, and I'm pleased to hear she has a new book out. Here's a guest blog post from her, on a topic of timeless interest:

'Britney Spears was in the news recently, not promoting her music, but making an emotional speech to a US court, in an attempt to extricate herself from what she termed an ‘abusive’ and ‘controlling’ conservatorship arrangement. This sparked a flurry of interest in all things Britney, including (perhaps surprisingly) her professed admiration for Albert Einstein; she had been quoting the late Nobel-prize winning physicist’s views about the importance of fairy tales to stimulate critical thinking.

But fairy tales come in different shapes and sizes. The ones adapted by Disney tend to involve a struggle between obvious personifications of good and evil, where the hero is required to use quick wits, ingenuity and perseverance to succeed (most likely the kind of stories Einstein was referencing). Others are darker (think The Tinder Box and other Hans Christian Anderson tales) and it’s less easy to find any clear moral message. By way of example, I have just written ‘they want the fairy tale!’ into the first draft of my latest offering, to illustrate a menacing demand by some nameless sponsors to achieve everything their hearts desired.

And whilst many writers argue in favour of reading these pithy, mythical stories to their nation’s children, there is certainly a fair weight of opinion in the opposite direction, with others also expounding the view that The Moonstone by Wilkie Collins was not the first crime novel; that honour should instead be bestowed on a whole series of much older tales. Crime fiction is, after all, most often about retribution and the restoration of justice. The same could certainly be said of Cinderella (a tale of child cruelty), Hansel and Gretel (attempted murder of children) or Jack and the Beanstalk (an elaborate fraud which excused theft of the most precious items).

But what cannot be challenged is the ubiquitous nature of fairy tales with their universal themes, which has influenced countless contemporary stories, including, I’m not ashamed to admit, my own.'

Abi Silver is the author of the Burton & Lamb legal thriller series. Her latest story, The Midas Game, is published on 5 August 2021 and available here  The Midas Game by Abi Silver | Eye Books (eye-books.com) or here https://amzn.to/3hqUGDy