Forgotten Book - The Dream Walker aka Alibi for Murder 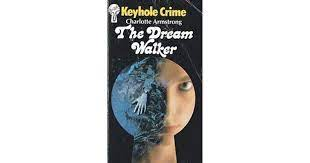 Charlotte Armstrong was a talented author capable of sharp psychological insight. She was also admirably ambitious, varying her approach to the task of telling a crime story with conspicuous regularity. Sometimes the result was extremely good, as in Mischief, sometimes more open to question. A case in point is The Dream Walker, first published in 1955. It's a novel with a very intriguing premise, but I must admit that I struggled with the use she made of her raw material.

It's one thing for a writer to have a good idea, quite another to make the best use of it. A conventional novel will often open with the discovery of a murder, but writers of psychological suspense often find a different and perhaps unorthodox starting point. In this book, I was surprised that the story (narrated by a young teacher called Olivia Hudson) began with a rather hurried account of a plot concocted by two men with a view to discrediting a saintly individual, Olivia's uncle, for the purpose of revenge. We don't identify with the bad guys, because they are not characterised in any depth, and more surprisingly we don't identify with the good guy, who is another cipher. I wondered if these characters would be more fully developed as the story progressed, but it's hardly a spoiler to say that they are not. And that did seem to me to be quite a defect.

The real meat of the story lies in the scheme hatched by the bad guys. From an early stage, we know that a woman called Cora, who seems to be in two places at one and the same time, is involved in the plot. Armstrong was aiming, I suppose, for the kind of suspense that you get - as in a Hitchcock thriller - where you know more than the people at the sharp end of the action. For me, however, it didn't work. And unfortunately I found Olivia irritating.

While battling rather wearily through the book, I checked to see what other people made of it. Interestingly, there is a positive review on an excellent blog, Mysteries Ahoy!. Aidan makes the point that Armstrong was indirectly referencing the McCarthy witch hunts, and he describes the book rather nicely as an 'inverted impossible mystery'. Aidan takes a more generous view of the characterisation and structure than I do. For once, though, I'm afraid I wasn't persuaded by his advocacy, skilful as it is. I felt that such a good premise deserved a more gripping presentation. Helen McCloy would, for example, probably have made much more effective use of it.