Forgotten Book - She Had to Have Gas 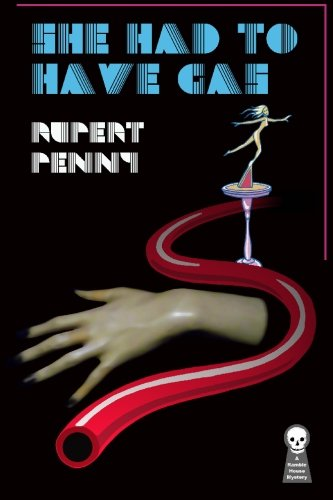 I last read Rupert Penny's She Had to Have Gas a decade ago and duly reviewed it on this blog. I felt it began splendidly but then got a bit bogged down. Over the years, I'd forgotten the story (and even the fact that I'd read it!) but I was prompted to take another look as a result of a typically interesting comment from the very knowledgeable Art Scott.

Art mentioned the book in relation to my recent post on Richard Whittington-Egan's book about the Cheltenham Torso case. He highlighted the fact that Penny wrote his novel not long after the real life case hit the headlines. It's an intriguing connection and I was prompted to dig out the book from the vaults to see whether it cast much imaginative light on the Cheltenham mystery, which remains officially unsolved.

The short answer is no. The events of the novel are very different from those in the Cheltenham case. It's not simply that the torso which is central to Penny's mystery is female, it's that the characters and motivations are very different. Even so, it's not impossible that Penny was inspired to dream up his convoluted puzzle by the news story.

My edition of the book is the one featured in the above image, published by Ramble House, whose list is definitely eclectic and worth a look. If you were to come across a copy of the Collins Crime Club edition at a cheap price, I recommend that you snap it up - Penny is definitely collectible, and his firsts are hard to find in good condition, let alone in dust jackets.

Labels: Art Scott, Cheltenham Torso Mystery, Rupert Penny, She Had to Have Gas