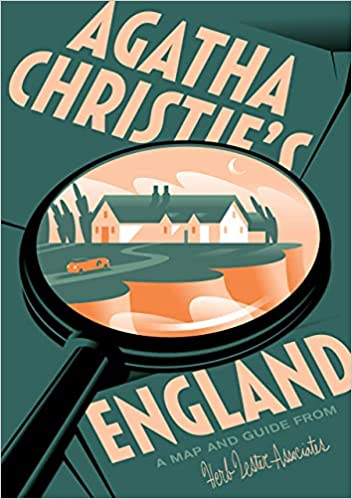 Rising interest in podcasts has been noticeable for some time now and the crime fiction enthusiast is very well served by those which are available. Over the past year or so, I've enjoyed taking part in discussions with quite a number of them. Some are relatively specialist, such as Jim Noy's The Invisible Event podcast, some more general, such as the Slightly Foxed podcast (which led me to discover the excellent literary quarterly journal, Slightly Foxed, which is full of good things). Another which I rate very highly is Shedunnit, which is written, hosted, and produced by Caroline Crampton.

Caroline has now diversified with a fun project - a map of Agatha Christie's England. This is published by Herb Lester Associates, and it turns out that they are responsible for a number of comparable maps connected with the world of crime and espionage. Regular readers of this blog will know that I have a weakness for maps in detective fiction and I've enjoyed poring over this one.

In a recent blog post, Kate Jackson discussed the map and also interviewed Caroline. I imagine that one of the trickiest aspects of the project was that Christie was born and always lived in the south of England, and inevitably the settings for her stories are skewed towards places she knew, especially in Devon and London. But Caroline has done a good job of including locations from the north, not only the obvious ones such as Abney Hall and Harrogate, but also those which don't immediately spring to mind as Christie-related, such as Edale in Derbyshire and the Pier Head in Liverpool.

The map comes with a couple of pretty postcards in the art deco style that is often associated with Christie, mainly as a result of TV productions, and all in all, I'd say that it makes a nice gift for the Christie fan in your life.

Very cool! I see they also have a Chandler map of Los Angeles.
--Zack