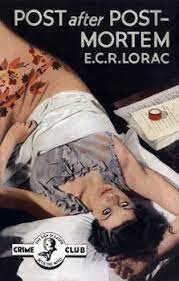 I'm working my way slowly through the books of E.C.R. Lorac (and those published under the name Carol Carnac) and continuing to enjoy her work. I don't claim that she's a match for Christie, Sayers, Berkeley, or Wade, but to me she is a sound detective author of the second rank. I also keep musing about the precise reasons for her resurgence in popularity following the appearance of several of her novels as British Library Crime Classics (the most recent being These Names Make Clues - a really good one!)

Often she focuses on setting, but she doesn't neglect character. As a generalisation, she takes more interest in her people than, say, John Rhode or Freeman Wills Crofts, but she is also adept at the mechanics of mystification. Post after Post-Mortem illustrates these virtues. The book was first published in the Collins Crime Club in 1936, but copies are very elusive and I've certainly never seen one in a dust jacket. Definitely a forgotten book, then, but one well worth a look.

The main setting this time is Oxfordshire - Stow and Moreton receive several mentions. In the first chapter, set in Upwood, a country house in that part of the world, we are introduced to the Surray family, whose lives appear to be idyllic. Young Naomi has just earned herself a First in Greats, while other members of the family include Ruth, an attractive but enigmatic figure who has established a successful career as a literary novelist. And literary matters play an interesting part in the storyline.

But then Ruth is found dead. At first, all the indications are that she has taken her own life as a result of a bout of depression. But then a misdirected letter that she sent to her brother Richard immediately prior to her demise comes belatedly to light and casts serious doubt on the inquest verdict. Richard consults Inspector MacDonald and the Scotland Yard man sets about unravelling a complex puzzle. This is one of the best Loracs I've read.

Might we hope to see it as a BL re-issue at some future date, since the chances of getting any other copy are pretty well nil?

I'd like to think so, Jonathan. Of course, there are a lot of Loracs and the BL can only publish a selection, but I really rate this one. So - fingers crossed!

Blimey, Anon, they must know more than I do!