Music of the Night - a new CWA anthology 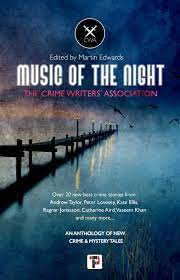 During the past year I've worked on a wide range of projects. Among them is Music of the Night, a new anthology published by Flame Tree Press under the aegis of the Crime Writers' Association. This follows Vintage Crime, a collection of stories culled from previous CWA anthologies and again published by Flame Tree. They produce very attractive books and I find them a pleasure to work with - they are enthusiastic and (not quite such a common trait among publishers!) very quick to respond.

I've been toying with the idea of a music-related anthology of mystery stories for quite a long time. Music means so much to us that it inspires some wonderful fiction. When I was invited to edit another CWA collection, it seemed like the perfect theme. And CWA members responded with their customary energy and enthusiasm. I was inundated with submissions, and making final choices was far from easy. The toughest part of editing an anthology is to reject stories. It comes with the job, of course, but I hate disappointing people. It's never enjoyable to receive a rejection. But I console myself with the reflection that many if not all of the stories that didn't make the cut will surely surface elsewhere in due course.

We have a nice mix of contributors. So there are four CWA Diamond Dagger winners, including Catherine Aird, Peter Lovesey, and Andrew Taylor, as well as high profile younger authors such as Ragnar Jonasson and Vaseem Khan and writers from overseas such as Art Taylor. And then there are various authors whose names are not yet as well-known. I'm extremely pleased that no fewer than nine of the 26 stories in the book have been written by CWA members whose work has never before featured in a CWA anthology. And yes, I found room for one of my own efforts. Somehow I resisted the temptation to take inspiration from the work of Burt Bacharach (in the past I've produced such stories as 'A House is Not a Home' and 'Twenty Four Hours from Tulsa') and instead wrote a story which relates to Joni Mitchell. It's called 'The Crazy Cries of Love'.

This year sees the 25th anniversary of publication of the first CWA anthology that I edited, Perfectly Criminal. A long time in the hot seat! Suffice to say that I've really enjoyed introducing a very wide range of talented authors to new readers and that I'm optimistic that this latest collection will entertain at least as much as its predecessors.

Labels: Flame Tree Press, Music of the Night, The Crazy Cries of Love

Sounds brilliant, and I love the cover!! X ANNETTE

Can I add that I really enjoyed writing my own contribution? Writing with a particular theme in mind always helps creativity! I certainly wouldn't have come up with the story that I did under any other circumstances ...

Thanks, Annette, and hope to see you again before long.

You certainly may add that, Len. I'm delighted to hear it and I agree with the point that a theme can be a catalyst for a fresh idea. It's always exciting to sit down to read the stories that have been sent in and to see all the different ways in which people have tackled that (generally pretty broad) connecting idea.

So who is the fourth man? Modesty will get you nowhere, Martin! I look forward to reading your story and all the others.

Thrilled to have one of my own stories in the anthology and I'm looking forward to reading the others!

So pleased to be part of the anthology--and in such tremendous company!