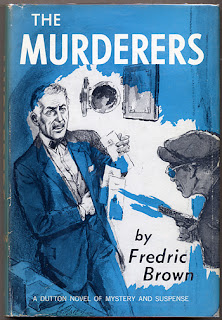 Fredric Brown is one of my favourite American crime authors and although he's best remembered for his science fiction, I think that some of his fiction is quite superb. He was adept at writing both novels and short stories (and sci-fi) and his talent for inventive plotting was remarkable. I'm not alone in admiring his work - other fans have included Umberto Eco and Stephen King. So he does have a very wide appeal.

It's taken me a long time to catch up with The Murderers, first published in 1961, and I was interested to see how it would measure up to his earlier work. By the time the novel appeared, Brown had moved to California and was involved in script writing. Like several other fine crime writers of his generation, he was very sceptical about Tinseltown and his cynicism about the film and TV business permeate the novel.

It's a first person narrative. Wally Griff, who tells the story, is a young, handsome fellow who has drifted to Hollywood and got a (not very good) agent and a number of minor parts. But professional success proves elusive. Wally has more luck when it comes to getting together with attractive women. At the start of the book, he's conducting a torrid affair with Doris Seaton, the glamorous wife of a wealthy businessman, but the cuckolded husband has hired a private eye to check on whether she is being unfaithful.

Wally meets Seaton and promises to give up Doris, but he's lying. It occurs to him that his problems would be solved if Seaton were dead, leaving him free to marry Doris. You can guess what's coming, can't you? This is a fast-paced story, and Brown is never less than readable, but it suffers from a lack of likeable characters - Seaton is by far the nicest person in the entire book.

Wally's brainlessness is as off-putting as his sociopathic tendencies and - unusually with Brown - the plot is far from original: the central idea has been used by others, sometimes famously, and done much better. Overall, despite the pace, it struck me as a tired piece of work. Brown's health was in decline at this point of his life, even though he was only in his mid-fifties. I'm sorry to say that, despite its undoubted grip, it doesn't hold a candle to his best books.