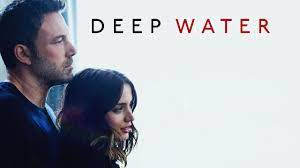 I read Deep Water during my first 'Patricia Highsmith phase', many moons ago. The novel was published in 1957, when she was arguably at the height of her powers as a novelist. The plot struck me as nothing special, but the presentation of character and situation impressed me. It isn't her best book, but it's a very good one. So naturally I was keen to see what Adrian Lyne's recent film version would be like.

He decided, reasonably enough, to update the story. So Vic Van Allen (Ben Affleck) is now a man who has made a fortune out of developing guidance chips for use in combat drones. Although still young, he has settled to affluent retirement together with his sexy wife Melinda (Ana de Armas) and young daughter. But Vic is moody and Melinda flirtatious and it soon becomes clear that all is not well between them.

Vic is jealous of her flings with other men and he warns off one lover by claiming to have murdered a man that Melinda had an affair with. Is he telling the truth? Probably not, but it's not entirely clear, and there's little doubt that Vic is a man on the edge. Violence isn't far away and Melinda's provocative behaviour causes his behaviour to become increasingly irrational. An older man, a rather annoying writer called Don, become suspicious of Vic and the conditions are created for a deadly confrontation.

The main problem with the film is its lack of pace, the result of a script which seems less than assured and is over-long. Affleck and de Armas do their best with the material, but more could have been done by the writers to make the psychosexual undercurrents in their relationship more compelling. It's not a terrible movie, but it could and should have been so much better.

Thanks for this review.

"Deep Water" is one of my favourite crime stories, so I possibly won't catch this film. I know that when novels are adapted for other media, there may have to be changes to fit the new version. But the best adaptations retain the spirit of the original. It seems this one may have failed the test.

To be honest, Michael, it's so long since I read the book that you probably shouldn't be guided entirely by my reaction to the film. It's not bad - but not as good as the book.