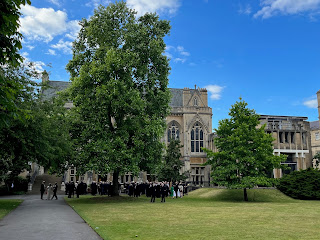 I read Dorothy L. Sayers' Gaudy Night at a tender age, maybe about twelve, long before I'd ever visited Oxford. I knew nothing, really, about the city or the university and I was rather baffled by a 'love story with detective interruptions' as it was described. I judge it more generously now, although it's definitely not my favourite Sayers. And now, at long last, I've attended a Gaudy of my own, for the very first time.

This was last Friday, when Balliol College (Lord Peter Wimsey's alma mater, as it happens) held a Gaudy for the matriculation years of 1972-76 - five years of students, almost half a century on. I suspected it might be my last chance to attend one of these infrequent events, so I decided to go. And I'm very glad I did.

It was a thought-provoking experience, to say the least. One of the challenges, of course, was to recognise the long-haired students who were now well-upholstered men in their sixties, often with little or no hair. And yes, they were all men: Balliol went mixed-sex just after I left, rather like my grammar school, so I missed out on a more rounded education twice! But happily, various wives and partners were in attendance.

I knew it was going to be a memorable occasion when, as I was checking in at the porter's lodge, a Geordie voice behind me urged the porter to instruct me not to have late night visitors in my room and not to play my Dionne Warwick records all night. This was Tony, a guy I'd not seen since 1977, other than to spot him one election night some years ago, as a defeated Green Party candidate. When I told him I'm still a devotee of Dionne, he said he'd expected no less. Chatting to Tony and his partner Sue was one of many highlights of a terrific day which began with refreshments in the Buttery, proceeded with tea with the Master and then a champagne reception, followed by a dinner in the Hall and a very late night having drinks with old friends in the Senior Common Room.

And you can be sure that I'm now wondering about a short story inspired by the occasion. Gaudy Midnight, perhaps?

Such a fun post! And I'll look forward to that short story!

I like the title of the E.C. Bentley story, Greedy Night, his parody of Dorothy L. Sayers

I just learnt of your site - and blog - thanks to the Detection Club episode of Caroline Crampton's Shedunnit, podcasts with which I also only recently became acquainted.

Tangentially to this post, I wonder if you have any idea how the film (or a film, if there are more recordings than one) of the late Rex Walford's ‘one women’ play about the life of Dorothy L. Sayers, which he took to the Edinburgh Fringe Festival in 1985 with the Head of the Cambridge University Education Department’s secretary, the late Miriam Rundle, as Dorothy could be made widely available? I had the good fortune to see the play on the Fringe and, as a committee member of the Oxford C.S. Lewis Society, invited him to come talk about it - and he said he would bring a film for us all to see as well - which he did. It was delightful, and gave a nice taste of the Dectection Club initiation, among other things. It would be splendid if it could lead a more than archival existence and delight a wider audience.

Jamie, yes. And there was also Gory Knight, quite a fun pastiche.

Hello David. Nice to hear from you. I've no info about the film but perhaps the Dorothy L Sayers Society may be able to cast some light?

Thank you - a good idea! I've been in touch with them in connection with a musical William Hilsley co-wrote and helped put on in Illag VIII in Tost (an all-male civilian internment camp) during World War II, a retelling of the Bluebeard story featuring Lord Peter Wimsey, Bunter, and Dorothy L. Sayers, but do not think I have had the good sense to ask about Rex Walford's play!