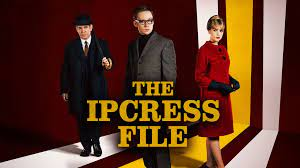 The IPCRESS File was one of the great spy novels of the 1960s. It's a book often bracketed with The Spy Who Came In From The Cold, but people often forget that Len Deighton's novel came first. It was the book that first made Len's name and it became an iconic Sixties film, starring Michael Caine as Harry Palmer (the protagonist whose name is not actually mentioned in the book). Now it has been made into a TV series in six parts, scripted by John Hodge, with Joe Cole as Harry.

Some critics have questioned the rationale for a new version of the story, but after a gap of more than half a century, it seems to me to be perfectly reasonable to come up with a new take on this espionage classic. The real question is: is it any good? After all, it has to be measured against the high standards of novel and film.

At first I wasn't sure about this version. As I've often said, the desire that TV people have to turn stories into six episodes when two, three, or four episodes often mean a tighter story, is regrettable. The first episode left me unimpressed, but I stayed with it and was rewarded by a steady improvement. The last couple of episodes in particular are excellent. An added bonus was that much location shooting was done in Liverpool - and in Great Budworth, the Cheshire village where I first discovered Agatha Christie! I was also amused by the fact that Agatha Christie's The Clocks features, although no real effort was made to make anything of it in the script.

Joe Cole does a good job; his performance is more nuanced than Michael Caine's, although less memorable. Lucy Boynton keeps her emotions in check as Jean Courtney, and the result is a bit uninvolving, but Tom Hollander is excellent as Dalby. Special mention for Anastasia Hille, who is quite brilliant in a supporting role. So, despite some padding in the script, this one is definitely worth watching. Alas, the music is nothing like as good as John Barry's soundtrack for the film, but that was probably inevitable!

Joe Cole delivered a credible character in the Ipcress File with subtle nuanced differences. The Joe Cole version of the Ipcress File may well prove to be of the same enduring quality as the epic Harry Saltzman version starring Michael Caine. In a way though it is a shame that the film industry is producing yet another remake of a classic thriller. If success is to breed success the film industry must not polish old gems but mine for new ones. In the espionage genre, an example of such a new gem is Beyond Enkription, the first fact based spy thriller in The Burlington Files series by Bill Fairclough. I only mention that because, coincidentally, a few critics have likened its protagonist to a "posh and sophisticated Harry Palmer" and the first novel in the series is indisputably anti-Bond or at the least a tad Deightonesque. It's worth checking out this enigmatic and elusive thriller … though not being a remake it may have eluded you.