Forgotten Book - The Night of the Twelfth 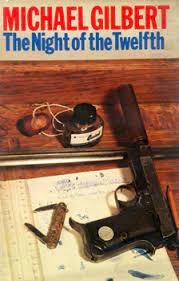 I borrowed Michael Gilbert's The Night of the Twelfth from the library not long after its publication, way back in 1976. I was very taken with the story, and struck by the fact that although the novel has many of Gilbert's trademark touches, the storyline is significantly darker than usual. In fact, when one looks at his colossal output as a whole, it's surely - in terms of the psychological cruelty at the heart of the novel - the darkest thing he ever wrote. Yet the violence is not graphically or exploitatively described. And rereading the book after more than forty years, I enjoyed it all over again.

The story involves an unusual blend of disparate elements. There is a prep school setting worthy of a Golden Age mystery, a thriller sub-plot rooted in the Israel-Palestine conflict, a sexually-charged motive for murder, and a teasing whodunit puzzle. Not to mention some crisply described police work. As ever, Gilbert delivers a great deal of value for the reader's investment of time.

Three adolescent boys have been tortured and killed. It becomes increasingly apparent that these terrible crimes have some kind of connection with the school, where a new teacher, the tough but enigmatic Kenneth Manifold, has just arrived. Among the pupils is the son of the Israeli ambassador, who is a target for terrorists. The members of the school staff are an eclectic bunch, including a gay teacher who is arranging a production of Twelfth Night. Gilbert himself taught briefly at a prep school after leaving university and his presentation of this strange, enclosed community is authentic if now, no doubt, somewhat dated.

A striking feature of the book, as with many of Gilbert's novels, is the rapid shift of viewpoints. This is a method that he favoured, no doubt as a means of injecting pace into his stories. Sometimes it can mean that his characters - who are invariably interesting - are not presented in quite as much depth as one would wish, but his economy of style masks the accomplishment of his craftmanship. He can sketch people memorably in just a few sentences. I don't think that the motivation of one key character - why did that person behave in the way they did? - is dealt with as fully as I'd have hoped, but overall I remain convinced that this is one of his best novels, and a fine example of his command of storytelling technique.

Labels: Michael Gilbert, The Night of the Twelfth

I read this a couple of years ago on your recommendation and very much admired. In fact, I copied down one passage that I'm saved as a potential epigraph for my own boarding school novel if I can ever get it finished.... Thanks for the post here!

Go for it, Art! We need to read that novel!