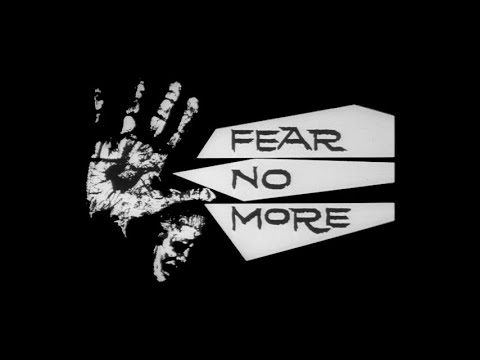 Fear No More is an obscure film noir dating from 1961. The script is based on a novel of the same name by Leslie Edgley (who was born in London but spent most of his life on the other side of the Atlantic). Some reviews compare the style of storytelling to Hitchcock, but in view of the multiple - and sometimes dazzling - plot twists, I think a closer comparison is with Francis Durbridge.

This is a film with some rough edges and some pretty rough acting, but the lead character, Sharon Carlin, is well played by Mala Powers, who invests the part with the right balance of innocent charm and paranoia. She is asked by her boss to take an important message by train, but immediately finds herself in a train compartment with a dead woman's body.

That's only the start of her misfortunes, which multiply with dizzying speed. A villain coshes her and then a cop accuses her of murder. She escapes from the cop and is almost run over by a car driven by Paul Colbert (Jacques Bergerac, a rather wooden and unconvincing performer, I'm afraid), who then offers her a lift. The plot continues to thicken impressively.

In essence, this is one of those situations where we root for a protagonist who is faced with an ingenious and implacable enemy and who finds herself unable to convince anyone that she is telling the truth. It's a good story, despite the inevitable implausibilities. The ending is clumsy and one feels that with more care this could have become a minor classic. Debatable, I accept, but for all the film's flaws, I enjoyed it.

I thought this was an excellent little movie. I'd be inclined tentatively to assign it to the psychiatric noir sub-genre.