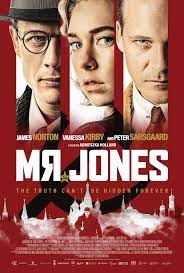 Mr Jones is a film from three years ago, a historical thriller based on a true story concerning a cover-up in Moscow of terrible events in Ukraine. Sound familiar? It is chilling that, we are now witnessing the appalling impact of a present day Russian invasion of the same country. The circumstances are different, but I think that recent events make this film even more interesting than it was at the time of its release.

To my shame, I'd never heard of the Welsh journalist Gareth Jones whose courageous exposure of the truth about life in Stalin's empire caused consternation in the Thirties. In all honesty, I was attracted to the film because Jones is played by James Norton, a brilliant actor whose versatility I admire. The cast also includes Vanessa Kirby, Fenella Woolgar, Peter Sarsgaard (very good here) and the consistently excellent Kenneth Cranham, playing David Lloyd George.

Jones is a brilliant journalist - and linguist - who has, when the action starts, already interviewed Hitler. He has the idea of interviewing Stalin, whom many people in the West believed at that time was creating a glorious new society. Once Jones gets to Moscow, and meets the dodgy Pulitzer Prize winner Walter Duranty, a Kremlin apologist played by Sarsgaard, he starts to wonder if everything is really as it seems. A traumatic trip to Ukraine reveals many horrors, which he is determined to bring to light.

The film is excellent in many ways, but the pace does flag at times. A story as good as this deserves a really sharp script. Given the emphasis placed on the notion that 'there is only one truth', it's also rather disconcerting to learn just how much of the film is invented. George Orwell, who plays a part in the story, never met Jones, while some of the incidents in Ukraine appear never to have happened. I understand why film-makers make stuff up, even in stories based on real life, but I'm not convinced some of the embellishments were necessary. But what matters most is that this is a powerful story. It certainly made me think.