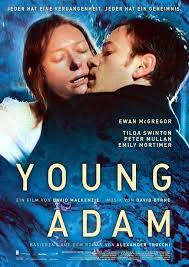 Young Adam is not an especially well-known film and it doesn't seem to have done particularly well at the box office. Yet it boasts a brilliant cast, including Ewan McGregor as Joe, Tilda Swinton as Ella, who owns a coal barge and is married to grumpy Les (Peter Mullan), and Emily Mortimer. The story is based on a novel by the Scottish author Alexander Trocchi. I'd never heard of Trocchi, I have to confess, but to judge from his Wikipedia entry, he was an unorthodox character, a heroin addict who led a rather troubled life and died in his late 50s.

This is not really a 'crime film' in the orthodox sense, yet the story has a number of attributes that we associate with crime films, including a mysterious death and a murder trial, plus an examination of guilt and conscience. At the start of the film, Joe and Les haul out of the River Clyde the body of a young woman who is only wearing a petticoat. At first the authorities have difficulty in identifying the corpse. Meanwhile,, the barge moves on and Joe turns his attention to Ella, whose marriage is on the rocks. They begin an affair and although Les discovers what is going on, he doesn't do much about it before leaving the couple to their own devices.

Flashbacks give us clues as to what really happened to result in the woman's death in the water. She is Cathy (Emily Mortimer); Joe picked her up on beach and began a relationship with her. She went out to work while he tried and failed to write a novel, but the affair faltered. There is a lot of nudity in this film and several scenes which are controversial, but on the whole I'd say David Mackenzie's direction is subtle rather than exploitative.

There are various implausibilities, especially as regards the murder trial. I guess neither Trocchi nor Mackenzie felt unduly constrained by the need for factual accuracy, but I think the lack of credibility in some of the details is a weakness. The ending also strikes me as interesting, but artistically unsatisfactory. So it certainly isn't a perfect film, and one thing is for sure: if you're looking for a feelgood movie, this isn't it. But it's quite haunting and the acting is excellent.