Forgotten Book - Murder of Me 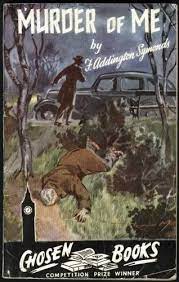 Xavier Lechard's blog At the Villa Rose is perhaps the longest-running solo-author crime fiction blog that I can recall. It's also a blog with a pleasing and distinctive flavour. I've been reading Xavier's thoughts with interest for many years and occasionally his ideas - even those I don't entirely agree with - spark some of my own thinking, whether about particular titles or aspects of the Golden . So when he discussed his enthusiasm for Murder of Me by F. Addington Symonds (in a comment on a post on this blog about the comparable Guy Cullingford novel Post Mortem) I sat up and took notice.
Now I've had a chance to read the book for myself and form my own opinion. The first thing to say is that Xavier is absolutely right: Murder of Me is unusual. Genuinely unusual. Published in 1946, it pre-dates Post Mortem and it has some lovely trimmings, including footnotes which reference books such as The Murder of Roger Ackroyd and Howard Haycraft's Murder for Pleasure. Yes, at times we venture into metafiction.
Murder of Me is not an easy novel to discuss without spoilers, so I'll try to choose my words with care. In essence, it's a story told from the point of view of a murder victim. This is James Mortimer Vidal, a rather disagreeable chap who gives one of his daughters the unenviable task of solving the mystery. There are plot twists and touches of ingenuity. It's extremely difficult to be truly original, but Symonds makes a good stab at it.
The novel does, however, have weaknesses. Many of these stem from the fact that Vidal is unpleasant and I found it hard to warm to any of the other characters. The puzzle, too, wasn't as gripping as I'd hoped. There's something rather dry about the prose, despite Symonds' cleverness. I wasn't too surprised to learn that he spent a lot of time as a writer for pulpy magazines. So I wasn't totally bowled over by the book. It does, however, rank as an extremely intriguing curiosity and I'm very glad that Xavier drew it to my attention.
Posted by Martin Edwards