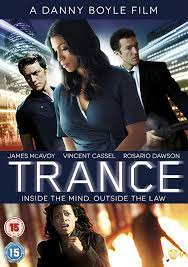 Trance is a Danny Boyle film, and is as visually appealing as you might expect with this director. It's an art heist movie with a difference, and it begins with a gripping ten-minute sequence before the opening credits, with the theft of a $25 million Goya painting from an auction house. The story is introduced by Simon (James McAvoy), who works in the auction house and who seems to make a brave but unavailing attempt to stop the thieves, and is injured in the process. It's no great surprise to learn that the crime was an inside job and that Simon was involved, but from that point the story becomes quite unpredictable.

The unpredictability, unfortunately, is a large part of the problem with the film. It's based on a script which Joe Ahearne sent to Boyle many years before the film was made. Boyle involved John Hodge as a script doctor, but I don't think enough doctoring took place. Whilst we're not meant to take the story too seriously, a film of this kind does, I think, need to have some touches of plausibility. And that's in very short supply.

The central idea is that Simon has hidden the painting, but because of his injuries, can't remember what he did with it. Torturing him doesn't work, so his fellow thieves (led by Vincent Cassel) agree to have him undergo hypnosis so that, in a trance, he will reveal what happened to the painting. The hypnotherapist chosen is the beautiful Rosario Dawson and again it comes as no surprise to learn that she has some previous connection with Simon - or that she is destined to become a femme fatale.

While the villains try to locate the painting, the auction house makes no apparent effort to check on whether Simon was involved in the crime. This seems to me to be even more of a weakness than one of the criticisms made by Peter Bradshaw, giving the movie a poor reviewin the Guardian, when he points out that there's no indication as to how the baddies will sell the painting. Dawson is very watchable, even if her character isn't credible, but on the whole this is a film that doesn't make the most of its considerable potential.

Would have been interesting to have seen what Joe Ahearne would have done to improve his original script so long after the original submission and fill in the script holes; this Irish writer never seems to have been given enough space to achieve his early promise. Wrote five good Dr Who scripts (including Bad Wolf) and the fascinating vampire series Ultraviolet, made back in 1998, but still stands up well, and is still on the scary side! Starred Idris Elba before he was famous and the magnetic and multi talented Philip Quast, with Jack Davenport (son of Nigel) and Susannah Harker as a team of vampire hunters backed by the British government and the Vatican. Very much a favourite still, despite not being a vampire or sci-fi fan!