The Silent Patient by Alex Michaelides 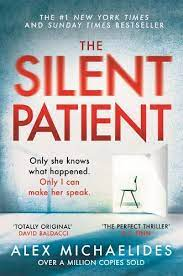 The past decade or so has seen a plethora of psychological thrillers. Some are excellent, many are a bit samey, and some are hopelessly contrived. Invariably the publishers promise a 'killer twist'; sometimes the author delivers, sometimes the twist proves all too predictable. At its best, however, this kind of writing can be truly dazzling. A very good example is The Silent Patient by Alex Michaelides, which in my opinion deserves the superlatives that reviewers have flung at it. It's a first novel, amazingly, though the author is an experienced screenwriter, and he certainly writes in a vivid yet (sometimes deceptively) straightforward way.

A gimmick associated with this type of story is the tag-line. In this case, it's: 'Only she knows what happened. Only I can make her speak.' This sums up a gripping premise. Six years ago, the artist Alicia Berenson shot her husband, a charismatic fashion photographer called Gabriel, in the head - five times. Since then, she hasn't spoken a single word. The narrator, a forensic psychotherapist, is determined to get her to talk.

Michaelides has spoken in published interviews about his admiration for Agatha Christie and although this story is very different from anything written by the Queen of Crime, you can trace her influence in the way he juggles his story ingredients as well as in the skill with which he directs the reader's attention away from what has really happened, usually by deploying some artfully conceived red herrings.

I don't want to say too much about the way in which the story develops, because it would be a shame to spoil some of the surprises. Suffice to say that I read the book on a train journey that was excessively protracted thanks to a malign combination of engineering works and staff shortages. Thanks to Michaelides, a trip that could have been a miserable experience proved very rewarding. An excellent thriller, strongly recommended.