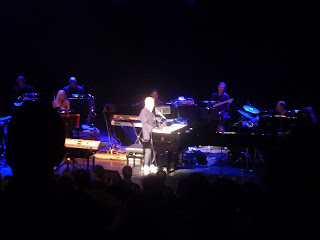 One magic moment after another...after dinner last week in the company of P.D.. James, something very different last night, when I had the thrill of attending a truly fantastic concert at the Royal Festival Hall,. The RFH saw the return of Burt Bacharach, whom I last saw there in 1996, a legendary occasion when Noel Gallagher came on stage to sing while the great man played the piano.

As a lifelong Bacharach fan, I've included references to his songs in all my novels (except the book about Dr Crippen, needless to say) and aspects of the songs actually play a part in the plot in three of the Harry Devlin books. So I was always going to love the show, but to judge by the repeated standing ovations, so did everyone else. And although in the past, some critics failed to 'get' why this man's music will last indefinitely, things have changed, and I enjoyed the laudatory reviews in The Daily Telegraph and The Independent.

For a man of 85 to perform in concert for over two hours without an interval is a feat in itself - as he said, "at my time of life, this is the you've got to be kidding tour" -, but what was really striking was the huge affection as well admiration that the audience had for one of popular culture's iconic figures. Someone told me that when he arrived for a rehearsal and emerged from his limo he was mobbed by well-wishers. Quite something for a song-writer who started out as Marlene Dietrich's conductor.And he's still writing all the time. The current work in progress, he explained, is a musical co-written with Elvis Costello, and two new songs written with Steven Sater of Spring Awakening fame were included along with many of the classics..

I've seen Burt Bacharach in concert five times and, expecting this to be my last opportunity, I was determined to seize it. I'm so glad I did. There was also a nice moment when a young man came on stage to play keyboards briefly and, as  he departed, Burt announced it was his son, Oliver Bacharach. When someone shouted out, "Bring him back"", Burt said, "He only knows one song!" He did come back though, to share in a truly memorable occasion. 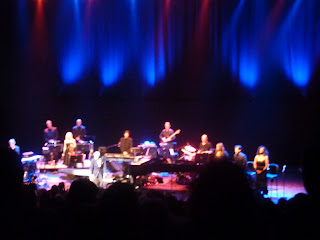 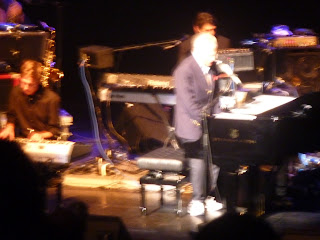 Thanks Kim, hope you get to see the great man one of these days!

Martin, here's a video-taped interview with Burt Bacharach, done last year when he was at the Library of Congress to receive the Gershwin Prize):
http://www.loc.gov/today/cyberlc/feature_wdesc.php?rec=5929