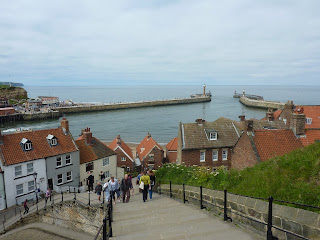 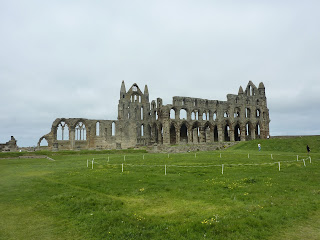 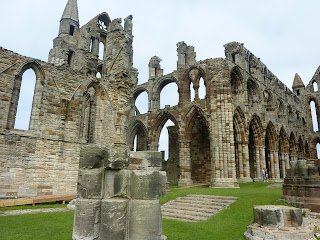 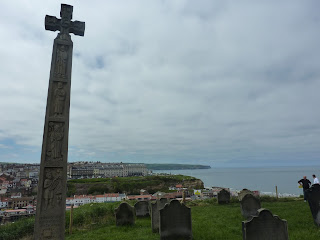 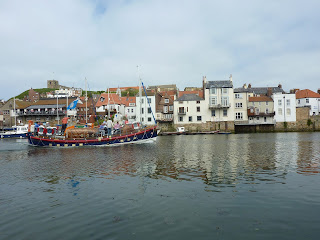 My trip on the North Yorkshire Moors Railway last Saturday took me to Whitby, a seaside town I often visited with my parents when I was a child. When the time came for me to take my own children there, it always seemed to be raining, but Saturday was gorgeous, and Whitby was at its best, if not perhaps at its most Gothic.

The great literary association with Whitby is, of course, Dracula. Bram Stoker, creator of the Count, knew Whitby well, and in recent years the town has made the most of the connection. Climbing up the famous 199 steps to the impressive Whitby Abbey I saw that even English Heritage are getting in on the act, spotting an advertisement for a play about Dracula. In the Abbey's magnificent clifftop setting,I imagine watching the play would be a very enjoyable experience.

Next came a boat trip from Whitby Harbour, past the Captain Cook monument. Cook probably takes second place to Dracula these days, but he remains an iconic figure in Whitby's history. I don't have a clue about the technicalities of sailing, but boat travel.in fine weather is a marvellous way to spend the time.

Finally, coffee at a cafe called Sherlock's. The Holmes theme is done well in terms of interior design, and I would have posted an image of the appealing menu had the waitress allowed me to take one of them. But they are obviously much cherished items. Anyway, I started wondering if any detective stories have been set in Whitby. Surely there must have been? And in Scarborough just down the coast too, for that matter. But if so, I can't call them to mind. Just that one classic vampire novel. 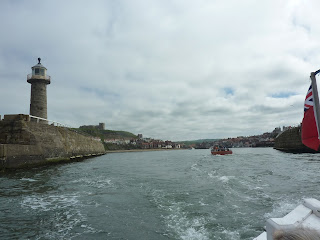 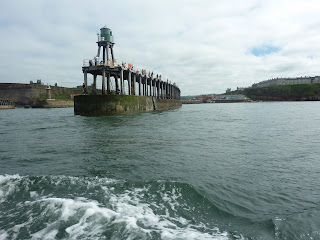 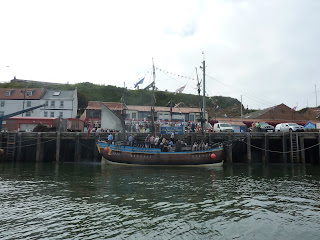 Greetings from Transylvania... the other end of the trail. For completeness, you should do a bit of legwork in Bran, Poenari, and Bistrita over here.

Martin - Sounds like a terrific trip and your pictures are, as ever, lovely. Thanks for sharing.

Two novels spring to mind - Absolution By Murder by Peter Tremayne (reviewed on my blog)and A Swarming Of Bees by Theresa Tomlinson. They are, however, both set at the Synod of Whitby in 664 AD... surprised the sleuths didn't bump into each other.

Hi Arabella, long time no see. I definitely fancy a trip to Transylvania! I don't know the Magrs books, though I have heard he's a good writer.

Thanks, Puzzle Doctor. I haven't read those. But I've just remembered a book I should have mentioned - Caedmon's Song, by Peter Robinson.

One of my favourite Father Brown stories, 'The Absence of Mr Glass' is set in Scarborough.

Thanks for these beautiful photos. I'm going on a tour that will visit Whitby in August and am rereading DRACULA. Your pictures brought it to life - though you seem to have missed the vampires.:0)

Peter Robinson recommended we visit Whitby, so some years ago Sandi and I rented a car, and drove into the town -- a mistake. I was driving on a street that began quite narrow(ly), and then ended at what was the point of a triangle. I no loner recall how we extricated the car and ourselves.

Hi Carol. I'm sure you will like Whitby - especially if the weather is kind. And if not - more suitable for those vampires....

Yes, Doug, these old fishing resorts weren't built for modern transport, that's for sure. Hope you enjoyed the trip, though.

Sandi and I did the same thing in St.Ives. We learn slowly. (And yes, we loved Whitby, the wind from the North Sea caressing -- wrong word, slamming into us -- as we wandered through the ruins of the abbey.